I got a random email last week from a young history teacher in Connecticut. She found, on the now-archaic webpage that I created as an undergrad, a couple of Greek quotations that I like. She emailed me because she's always liked the line attributed to Socrates in Plato's Apology: "The unexamined life is not worth living." She wanted to get it as a tattoo and thought that having it in the original Greek would look even better than the English translation. But since she doesn't know ancient Greek, she was concerned that she would end up with permanent skin art that any self-respecting philologist would mock her for. I checked Perseus to make sure that my quotation was correct, even though I remember copying it from the Apology when I read it. Since she still wasn't convinced (after all, who would trust an archaeologist in any philological matter?), I told her to go to her local university library, find the Loebs, and flip through the Apology until she found it. 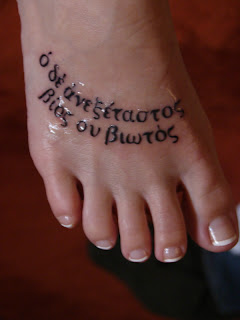 Finally satisfied that she had the correct quotation, she went out and got the tattoo (click for a larger image). The astute philologist reading this will find one error... can you? (Don't worry, it's an easy fix.) I think the tattoo looks awesome. The artist did an excellent job with ancient Greek script. I wonder if I should get a tattoo of "Gnothi seauton" now. Or perhaps "Ne te quaesiveris extra," which is a little more obscure and in Latin rather than Greek. I've also always loved the sphenoid (you know, that cute little graphic in the upper left-hand corner) and could get that on my ankle. Thoughts?

Anonymous said…
She must've been CRAZY!

Just kidding! Thanks again for all your help, I REALLY appreciate it and am really happy with the finished artwork. You're basically my hero!

Unknown said…
hi kristina,
after reading your blog i have decided i myself might get the greek quotation of 'know yourself' on my foot...a shamless copy of paula's tattoo im afraid! can you check that quotation for me? i would appreciate it very much!
Gemma
20 November, 2007 05:09

Anonymous said…
Hmm, the full quote is " ὁ δὲ ἀνεξέταστος βίος οὐ βιωτὸς ἀνθρώπῳ", which translates to "The unexamined life is not worth living for a human being", but it's fine, either you add "ἀνθρώπῳ" or not. The error in the tattoo is "οὐ". The "υ" (ypsilon) must have an aspiration mark, so indeed it is an easy fix. :) If I ever get a tattoo, it will be an ancient Greek quotation, and I am really happy she did so. I love it!
27 January, 2010 09:57

Anonymous said…
Hi,
I to am looking to get an ancient greek quote as a tattoo. I am looking for something to do with Penelope, maybe just the name, but preferably something significant to her story. Can you advise??
Many many thanks
Joe
24 April, 2010 07:06