Who needs an osteologist? (Installment 20)

This story seems to have slipped my notice over the last two weeks, but a team of radiologists in West Palm Beach, Florida, scanned an Egyptian mummy dating to 30-300 AD in advance of its going on display at the South Florida Science Center and Aquarium. 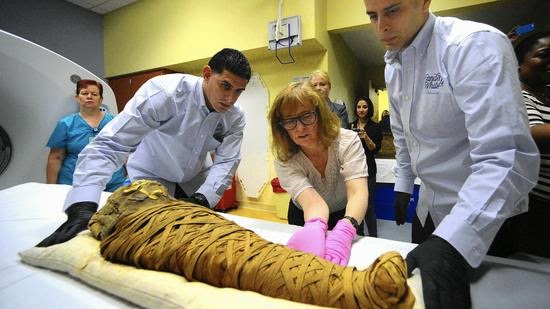 According to the news reports, which aren't terribly great, 40 years ago the mummy was studied, and researchers thought the mummy was that of a girl between the ages of 4-9 who died of tuberculosis.  The diagnosis rested on missing vertebrae, but those were found when they scanned her.  So based on a small spot, they think she may have died of appendicitis instead.

The analysis seems to have been sanctioned by the head curator of the exhibit, Egyptologist Carolyn Routledge.  But as far as I can tell from the news coverage, no osteologists were involved.  The main way I can tell? -- "Based on the modern scans, doctors say she likely is a Caucasian toddler."

Yeah, no.  Doing an ancestry estimation on subadult bones is simply not a good idea, because they're not in their adult forms (and we don't have solid methods of estimating ancestry from subadult remains, only adult remains).  However, the main reason not to call this child "Caucasian" is because that is a modern classification that is based on the (skin color) analysis of modern people, and she died 2,000 years ago. While you could argue that we could call the mummy "Caucasoid" using the correct forensic terminology, bioarchaeologists do not do ancestry estimations from modern forensic criteria.  When we do, we get issues like the shitstorm that erupted when Kennewick Man was called "Caucasian" and everyone thought that meant Europeans were in the U.S. before Native Americans.  This ancient Egyptian 3-year-old was not Caucasian.  Just... no.

Next time, please call an osteologist with expertise in mummies, or at least don't let doctors speculate on an ancient person's genetic heritage based on poorly understood terminology and poorly applied techniques used in contemporary forensic situations.

---
Previous Installments of Who needs an osteologist?

I just started reading your blog, and have been devouring your "Who needs an osteologist?" series! Do you think you'll cover how experts figure out frauds and fakes like the Piltdown Man?