Who needs O when there's PP?

Many researchers have used oxygen isotope analysis to look at changes in palaeoclimate, and the element is also useful for reconstructing past migration. A group of researchers at the University of Leicester is instead using hyrax urine. 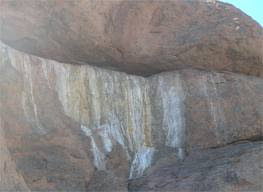 The hyrax looks like a big guinea pig (and is apparently related to the elephant). Hyraxes also pee in the same area for thousands of years; the urine crystallizes and can be examined for information on the environment and food of hundreds of generations of hyraxes (shouldn't it be hyraces?). According to the brief news item, researchers can get resolution as close as a few decades from the stratification of the urine. The hyraxes roam all around Africa, so this method is potentially useful for understanding the last 30,000 years or so of climate history in the area. Very cool!

(Also cool: the researchers are Drs. Carr, Chase, and Boom, which is, without a doubt, the most awesome byline I have ever seen in academia. And it reminds me of the (Washington Post) Style Invitational's annual contest to name a new bill.)

Anonymous said…
Other than both being mammals, how are elephants related to the hyrax?
13 October, 2010 14:43

Kristina Killgrove said…
Hyraxes, elephants, and manatees share a common ancestor: http://www.awf.org/content/wildlife/detail/hyrax. So hyraxes are related to elephants in approximately the same way as humans are related to, say, baboons.
14 October, 2010 06:51