Every time I teach our ANT2511 - Introduction to Biological Anthropology course, I include a fill-in-the-blank question on one of the last exams that reads as follows:

"List one thing you learned this semester about biological anthropology or human evolution that surprised you."

I make it worth a couple of points, and every student always responds to it. For me, it's both a way to gauge that they learned at least one thing from the course and a chance for me to take an accounting of what the state of undergraduate knowledge about human evolution is -- that is, what surprised them is generally something they were never taught before. In this way I can look at changes over the semesters to understand what kind of stuff they've learned in K-12 education. It also helps me understand what to focus on in my outreach to the general public.

This semester, I did a quick accounting of their responses. That is, I read all of them and created general categories into which their answers fell. Here's what that looks like:

#1 - The complexity of human evolution / number of species. There were 14 responses that I coded into this category. Most students were surprised that it took so many different physical changes to produce us, or that there were more members of the Homo genus than just us.

#2 - That Neandertal and Denisovan DNA is still around / that they interbred with modern human groups.  10 students commented in some form on their surprise that we are not completely different from these Middle Pleistocene populations and that their genes in fact appear to still exist in many populations around the world.

#3 - The lumper/splitter approaches to species. 6 students noted their surprise that not all biological anthropologists agree on how to classify species. This may reflect my approach to teaching the course (so YMMV), but since I tend toward the lumper side, I talk a lot about how they don't need to remember Homo habilis and Homo rudolfensis, for example, and the reasons I see them as the same species. A couple of these students commented further that it was kind of exciting to see that this field is still learning, and our understanding changes over time.

#4 - That human culture is very old. Another 5 students said that they were surprised that human culture and/or society was so old -- some mentioned tool use, others cave paintings, others language and communication.

#5 - The agricultural revolution sucked for our bodies and cultures in many ways. This was a topic I covered at the very end of the semester, and 4 students were surprised by this. My favorite response here involved the sarcastic phrase, "Thanks a lot, *corn*."

#6 - Hobbits! 3 students were surprised that a small-bodied, small-brained hominin existed until very recently.

Other responses fell into categories like "just how closely we are related to apes," "race is not a biological reality," and "bonobos have crazy sex lives."

Any of you ask your students something similar? What themes have you uncovered? I'm curious if it differs across the country and across the world. 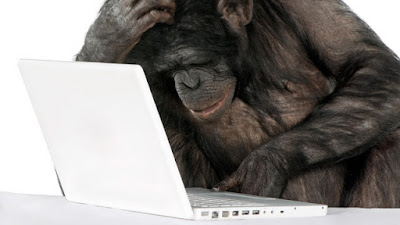 Clarisa said…
Professor Killgrove, I am a big fan of your science communication work in general, but I am super excited about this. My PhD is about finding better ways to teach biological anthropology in South Africa (I'm at the University of Pretoria), and one of my chapters will be about how students understand evolution. I like the approach of asking what surprised them as part of the assessment, and if you don't mind, I would like to use it in my classroom as well. Maybe we can compare responses? Thanks for the inspiration!
11 December, 2017 12:22

Kristina Killgrove said…
Yes, that would be super cool to see how your students answer the question! I imagine there would be a geographical/cultural difference here -- after all, I'm not sure how many of my students knew before this semester that South Africa was a country, let alone anything about the fossil record there. I imagine your students will know that material better. An internationally focused poll would be cool as well -- I mean, Europeans likely know more about Neandertals than Americans do. Since America suffers from a combination of lack of pre-human fossils and a distrust of science/evolution, we're somewhat of an anomaly.
11 December, 2017 12:26