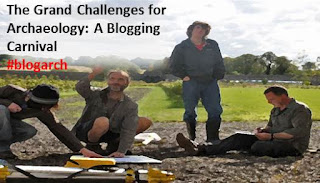 Doug Rocks-Macqueen recently put out a call for practitioners in the field of bio/archaeology to blog about the "grand challenges" their (sub)discipline faces, in response to a similar question posed to archaeologists in the pages of American Antiquity. After a month of telling myself I was far too busy blogging at Forbes and starting the spring semester to respond, I figured I'd take the advice I frequently give students - just put something, anything down on paper.  Far from being supremely well-thought-out, here are some disparate thoughts on one grand challenge in (bio)archaeology that I think my colleagues and I should work towards.

There are a few people working at "queering" bioarchaeology, but making this theoretical orientation more practical and more widespread is a challenge I'd like to see bioarchaeologists meet. For me, this idea comes into play when thinking about sex and gender in the past.  I often teach that the skeletal remains we are studying in lab can give us a good idea of the individual's biological sex, but that cultural gender needs to be reached using artifacts, burial style, historical records, and other contextual information.  While this is still true, it's not the whole story.  Biological sex is not a binary, even chromosomally, and sex estimates from skeletons are rarely clearly either/or. So when a bioarchaeologist is faced with a skeleton that exhibits skeletal attributes and DNA that don't match up, what do we do? 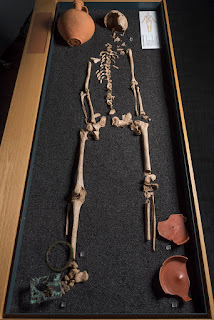 In the recent case of DNA analysis of some Roman-age remains from Britain, researchers tested the DNA of a skeleton thought to be female. Chromosomal DNA came back as XY -- male.  The skeleton is incomplete, with only a partial skull and partial pelvis -- the two main indicators of sexual dimorphism and therefore biological sex -- and the age-at-death is inconsistent between the new report and the original publication. So while their blog post noted that "the aDNA analysis reveals a secret even she may not have known: although physically female, her chromosomes are male," the media went with all manner of interpretations, from androgen insensitivity syndrome to microchimerism to "skeleton found with both male and female DNA."  Curiously, no one thought to question the sex assessment based on the skeleton (which is not a 100% accurate method), or to wonder whether this might have been a eunuch or other third/non-gender individual, or to ask what a sex/gender difference would have meant in the classical Roman world in the first place.

Bioarchaeology has always been subject to these "surprise" results, but the pace and frequency of DNA analysis in ancient remains is picking up dramatically.  Which set of information takes primacy in our understanding of sex and gender?  DNA?  Skeletal analysis?  Historical records?  Archaeological artifacts?  We've come a ways as a field since the whole "Gay Caveman" debacle of 2011, but five years on, the media still doesn't get it, and we still aren't helping them get it.  The general public is increasingly understanding what it means to be transgender, how that differs from sexual orientation, and how those differ from biological sex, but we bioarchaeologists have not yet managed to show the general public that these topics are equally relevant for the past, but also that we can't necessarily foist our contemporary understandings of sex/gender/sexuality/etc. onto the past.

As I work on a DNA study of my own, on Imperial Roman remains, this question is at the front of my mind.  What will I do if (and, surely, when) DNA results come back with sexes different from my osteological assessment?  Which data set should I privilege as being "right"?  And what will that mean for my interpretations of the Romans I'm studying?

So I'll echo Rosemary Joyce, who wrote about a similar challenge in her response to this question at her blog Ancient Bodies, Ancient Lives. "Our greatest challenge," she writes, "is in shifting public debates." But I'll go a bit further and insist that, when we're talking about physical bodies in the past, we bioarchaeologists bear a lot of the burden of this. Talking about sex/gender/sexuality in the past is clearly a topic of interest to the general public and to the media, and we're just not doing it well right now -- not in our published work, and certainly not in our public outreach.

I will be trying to write better about this topic in my Forbes pieces where relevant, but I will likely stumble (just as I stumbled in writing about ancient families a few months back). We all stumble as we learn, but I hope that my mistakes are instructive and that social media, blogging, and other outlets will be used as constructive ways to exchange ideas and to teach one another about the complexities of the embodied lives of past people.