The Next in the Last

Episode Summary
A body is found in a park, flayed with the middle excised, and placed on an obelisk. The Jeffersonian team and Booth head to the scene. There is extreme predation by vultures. Based on the height of the nasal bridge, Brennan suggests the victim was male. Depth of the sternal rib endings suggests he was in his 20s. Saroyan finds a Chiranthodendrum flower in his throat, which Hodgins says means "beware."  They think they're looking at a Pelant copy-cat, since all of this fits with his m.o. 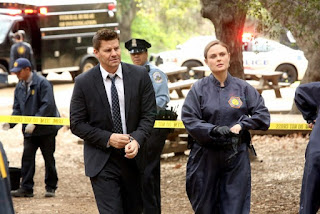 Bray and Edison examine the body when it gets back to the Jeffersonian.  The heart was cut out postmortem, but liver and lungs still remain for Saroyan to test. A thin epiphysis on the iliac crest suggests the victim had osteomalacia, possibly from staying indoors too much. Hodgins finds traces of pizza, and Angela gets a facial ID: Franklin Holt, an independent computer consultant who worked from home.

Booth and Aubrey head to Holt's inexplicably ginormous house. There they find Leelah Strawn, who claims to be Holt's girlfriend.  She says she saw the blood and was calling 911. They met through playing Call of Duty. The Jeffersonian team shows up to the crime scene. Blood and tissue is everywhere, and there are no computers or hard drives to be found. Leelah says that Holt got someone at Dunlop Investments fired, so Aubrey questions Owen Elixson.  Elixson seems to be somewhat obsessed with Pelant, but claims it's because of his hacking genius. Holt broke into Dunlop's sooper secret server, which even Elixson didn't have access to, and that got Elixson fired.

Back at the Jeffersonian, Wendell and Edison find kerf marks on both scapulae and on the inferior margin of the manubrium. A similar bone saw to the one Pelant used was also used in this case. The striae show hesitation marks, which Brennan thinks means the killer was questioning these actions. Daisy shows up and finds a random VHS tape procured from Holt's house.  Angela realizes that's where Holt's backup is, and runs off to read it.

Booth and Aubrey call in Kevin Dunlop for questioning.  He is evasive about the 4.6 billion dollars, but Aubrey goes all daddy-issues on him, revealing that he helped bring down his fradulent-investment-banking father. Dunlop admits that the money was there until the day Holt died, when it vanished. Then the writers get hella confused about how encryption and decryption work, as Angela is able to decrypt some of the VHS tape -- enough to search for random strings! - but thinks it'll take "months" to decrypt the rest.  Anyway, suspension of disbelief and all, so Angela gets hits on the two prime suspects, Elixson and Dunlop.  Elixson admits he was giving Holt passwords (presumably while he still worked there, since they'd change those passwords after he was fired) in exchange for money.

In order to figure out cause of death, the forensic team finds evidence of a bullet wound on the radiating fractures on the left scapula.  The hydrostatic shock from the bullet cracked the bone.  The midsection was removed, to fit the body over the obelisk, but in the crudest way possible. Hodgins finds that the pizza from Holt's house was covered in Cladosporium. Based on its hyphae, he thinks it was delivered the night Holt was killed, between 8-10pm. The hesitation marks that the forensic team saw on the bones, they realize, were actually the result of an injury to the killer: radioulnar synostosis, preventing the killer from rotating the wrists.  Hodgins for some reason commandeers an ancient mass spec called a Calutron and finds that the pizza box has gunshot residue on it. The pizza delivery person was likely the killer.

They get surveillance tapes from the pizza place and notice someone picking up the pizza funny as the person does not have full wrist range-of-motion. Brennan notices the valgus angulation of the knees and realizes the killer was a woman. They suspect it's Leelah, especially when Angela says she never found evidence of her being Holt's girlfriend on the mysteriously-half-unencrypted-VHS-tape. Leelah was also a hacker, known in some circle or other as Mainframe.

Apparently, also on the magic VHS tape was info about how Holt was tracking Leelah. He put a digital trap on... something of hers?... which Angela uses to find out that Leelah used one of her anonymous IP addresses to rent a car (because, sure?). Her debit card was used outside of Hagerstown, so Booth and Aubrey head there to find her.  Somehow they find her exact whereabouts, as she's heading towards a train station. She tazes a dude and jumps onto a train. Booth and Aubrey find her, she throws some barrels or stuff in their way, gets away, then goes into a chicken-coop-car, disarms Aubrey, locks Booth out, and repeatedly tazes Aubrey.  Anyway, Booth pries open the door, Aubrey doesn't seem particularly fazed (heh), Booth sharp-shoots the tazer out of her hand, and they cuff Leelah.

In the wrap-up, Angela finds all of Hodgins' money.  He asks her to secretly funnel it to charities because of course that's a thing you can do without any sort of paper trail. Vaziri shows up to comfort Saroyan. Pelant sends a beyond-the-grave video message to Brennan about how he'll never die, and she literally just shuts the computer on him, which was honestly kinda funny. B & B walk out of the Jeffersonian into the sunset with all the staff looking on and nodding sadpreciatingly.

Ratings
Forensic Mystery - B-.  I still sort of like the Pelant arc, even if it means horrible, laughable computer forensics.

Forensic Solution - B. It seemed mostly reasonable, except for the knee thing.

Drama - C.  It's been clear for months that this episode had to be written as a series finale in the event the show didn't get picked up for another season.  So there was a bunch of hand-wringing and tears... that end up not feeling earned since we know it'll be returning.

---
NB: If you haven't seen my meta-post over at Forbes on the best/worst episodes in the last five seasons, do go check it out!

edonline said…
Did we ever figure out WHY the woman posing as the dead guy's girlfriend decided to follow in Pellant's footsteps? Was she actually a girlfriend of Pellant's? An admirer of hjis work? Just someone who decided "Meh, I think I'll kill a guy today"?
12 June, 2015 06:59

Kristina Killgrove said…
Yeah, good point. I mean, she admired Pelant and also wanted to steal the money he'd stolen. But why that involved learning how to meticulously flay a human body, extract the midsection, and pose it on an obelisk (seriously, she was tiny and had wrist issues, how did she do that alone?) is beyond me. Motive for the killing was there, but not for making it look like Pelant.
12 June, 2015 11:53

The product that I most often see labelled as fair trade is coffee. I don't actively seek out fair trade products but when
I have a choice between a fair trade option and one that isn't I will buy the former even if it costs more. Generally
I think there is a growing interest in sustainability and that marketing in that way will pay off.Wholesale
13 June, 2015 18:15

Kristina Killgrove said…
I thought they screwed up Hagerstown, but my knowledge of central VA/MD geography is a bit rusty since I haven't lived there in close to 20 years now.
16 June, 2015 23:19

Unknown said…
Your idea on the decryption is a bit off it would seem. Lets take for example the simplest encryption methods. They use hashing tables based on the contents to encrypt. So if I were to create an encryption myself, I would have one master key to determine the hashing algorithm, but that is only half of the story. That is to to get access to the individual file's key, and you can place that in the order of hashing. Then in order to gain access to succeeding hash key, you need to decrypt the preceding. So the latter not only depends on the direct descendant, but all its predecessors. So in fact if you don't have the "skeleton key" file, it would take you x! amount of time, that is X factorial to decrypt later and later data. So you would store least important files in hash entry 0, and sort further down by importance. That is a very simple encryption method. I know bones make many mistakes in their show, but please be sure of you facts before you speak.
19 June, 2015 02:47

Lynn said…
Old Twilight Zone: aliens come to earth. Panic ensues. A book is recovered. from the aliens. The title is decoded as "TO SERVE MAN." Relief replaces as humans decide aliens have come for philanthropic purposes. Surprise ending when it is discovered that the rest of the book, in lowercase type, is a cookbook. Fade to black with ominous music.

Totes believable that only part of the tape can be decoded. It's probably in lower case. Or perhaps written by aliens.
19 June, 2015 13:36