The Life in the Light

Episode Summary
A body shows up at the Jeffersonian, covered in red slurry because it was found when firefighters were putting out a forest fire. The bones are fractured from the fire, but Wendell says the skeleton is male based on the large, ovoid obturator foramen. The fine texture of the pubic symphyses puts his age at mid to late 30s, and parabolic dental arch suggests Caucasian. There are metal plates in his head and his right ankle, injuries commonly seen in motorcycle accidents. His charred clothing has evidence of hydrocarbons -- he was doused in gasoline, which may have been the source of the forest fire. Angela's facial reconstruction gets a hit in the DC criminal database: an ex-con named Micah Stanbow, who was in a biker gang and went to prison for felony assault and grand theft auto, but who turned his life around and became co-owner of a yoga studio. 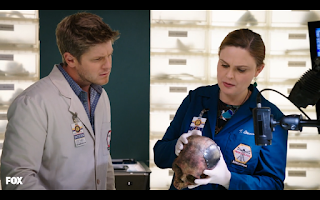 Booth and Aubrey question Dale Brock, the leader of Micah's old biker gang who got out of prison the day that Micah was last seen alive. Brock insists he hasn't seen Micah since before going to prison. Booth and Brennan go to Micah's yoga studio, which he ran with his girlfriend, Nan Rosemond. She claims not to know anything of Micah's disappearance, which she didn't report because she thought he was on a silence retreat to the woods to meditate. She points them at a yogi named Raj who ran a studio down the street until Micah's became more popular. Raj has no alibi, claiming he was in an intensive, solitary meditation practice at the time of Micah's death.

Meanwhile, Saroyan finds that Micah didn't go into the forest voluntarily. Muscle tissue rupture around the shoulder shows he was dragged. Further, damage to the left zygomatic has radiating fracture lines that point to perimortem injuries caused by a rounded object, possibly a bat or a pipe. Hodgins starts to analyze Micah's melted plastic sandal for particulates, and Angela looks through Micah's cell phone to find he was using an app to receive pictures of a woman who was not his girlfriend.

Aubrey talks to the woman, a former yoga student named Elizabeth Collins, but she asserts Micah and Nan were in an open relationship and that, even though she was charged with assaulting a previous boyfriend with a baseball bat, she did not hurt Micah. Booth and Aubrey also talk to Nan again.  She too had a lover, Donato, an artist, but she doesn't think he had anything to do with Micah's death. Hodgins, though, finds evidence of oil paint on Micah's shoe, and Angela works backwards to figure out that he must have stepped in it the day he died. So Aubrey and Booth visit Donato, whose face is beaten up.  He insists he fell down a flight of stairs and that Micah came to check on him. But Micah got a phone call and headed off on his bike to a nearby location.

Wendell then finds a tiny nick to the distal end of the left femur in the area of the femoral artery. If something sharp injured Micah, it could have transected the artery and caused him to bleed out. There are similar nicks to the left ribs and the right humerus. Brennan thinks that Micah may have been pushed through a window with an aluminum frame, and Angela reconstructs the scene with Micah holding the back of his head, based on a depression fracture on the occipital, and then being propelled through the glass.

Aubrey finds out that someone using a burner cell called Micah the day of his death, and Angela triangulates Micah's destination based on his location, the time it would take to get there, and geotagged photos from social media. He was seen entering a bar called Nat's Place, as was Dale Brock, the former bike gang leader. Aubrey talks to Brock again, who admits to having lied because he is not supposed to have contact with felons. Brock asked Micah for help; he needed $20k to pay off back child support once he got out of prison. Micah told him to stay at the bar, he'd get the money; but Micah never came back. Since $20k was the entirety of Micah and Nan's savings and since a fragment of Tibetan bamboo was found in Micah's skull, Booth and Aubrey go back to talk to Nan, whose patio furniture is glass and who is missing a coffee table.

Nan admits that she got upset that Micah wanted to drain their savings for Brock.  She hit him hard with a bamboo-case tablet, which knocked him into the glass coffeetable. She dumped the body and the tablet, but the data from the tablet was uploaded into the cloud. Angela finds the data, and there is damning evidence of the crime of passion because the tablet started recording after Nan hit Micah with it.

Ratings
Forensic Mystery - B-.  A few more persons-of-interest compared to last week make the mystery a bit more interesting. And we never did learn what caused the perimortem injuries...

Forensic Solution - B+. Pretty reasonable forensics this week, with the exception of the facial ID and wood fiber nonsense.

Drama - C+. More Booth and Brennan drama this week, that seems to be wrapping up. The titular heroine was reunited with Booth reasonably quickly in screen time but with enough time and exposition for the reunion to feel real. Hodgins and Angela are apparently leaving, which means I guess no more insanely fancy computer forensic particulate madness next season?