Skip to main content
Posted by Kristina Killgrove May 06, 2015

The Big Beef at the Royal Diner
Episode Summary
A woman who scales a wall at an exercise boot camp falls over, onto a decaying body. Based on the narrow pelvic inlet and flat profile of the skull, Brennan identifies him as a Caucasian male. Separating peri- and post-mortem injuries may be difficult, since the woman fell directly onto the body, and the body was also doused in a variety of acids and bases, speeding decomp. 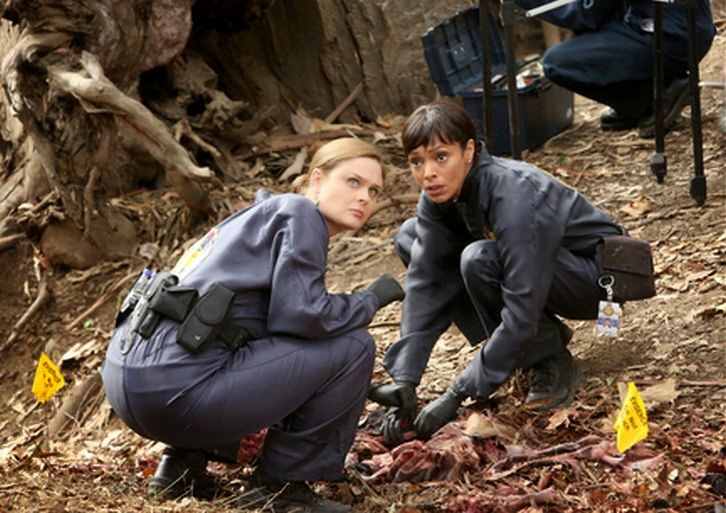 At the Jeffersonian, the team finds fractures to the man's ribs, clavicles, and T6-9 vertebrae. His clothes are covered in food stains. Saroyan finds evidence of extra organs: kidney and pancreas. Coupled with evidence of diffuse idiopathic skeletal hyperostosis (DISH) on the spine, Saroyan concludes that the man suffered from diabetes and had had organ transplants as a result. They figure out that the victim is Chili Reuben, a food show host who was in D.C. filming a new episode of his TV show the week prior. His clothes are covered in food remains, there is both alcohol and marijuana in his blood, and he had hyperhidrosis or excessive sweating.

Booth and Brennan head to a hotel to talk to Chili's producer, WoodySid, who is inexplicably doing yoga on a bed as he talks to them. The FBI techs found Chili's car keys, but not his car, and his signature chili pepper earring was also missing. Chili was reviewing diners in the episode he was filming and had given good reviews to all but the Royal Diner, one of Booth and Brennan's favorite restaurants. They talk to Frankie, the proprietor of the diner, who insists that Chili wanted $3,000 to give his diner a good review.  Aubrey and Booth then do some digging and find out that Chili was broke. They also find his earring at a pawn shop, and it was hawked by Kenneth Morton, one of the people who worked on Chili's show. Morton claims that Chili gave him his earring and told him to pawn it for crank.  Morton instead pawned it and used the money to go see his ill mother in Philly.

Meanwhile, the Jeffersonian team scours the body looking for cause and manner of death. Fractures on the temporal and parietal were caused by blunt force trauma from a single point of impact. Additional fractures run along a diagonal line from sternal ribs 3-8 on the left side. Based on the curvature of the indentations, Brennan thinks the murder weapon was cylindrical, like a gold club, pool cue, or sound boom. Abrasions on the right metacarpals and the second, third, and fourth proximal phalanges suggest a struggle, and a hairline fracture of the glenoid fossa of the right scapula that extends to the olecranon of the ulna is about three weeks old. Chili had gotten into a couple recent fights.

The FBI questions Morton again, who said that Chili got into a fight with a bouncer at a bar, then took his keys and drove away. They find his car, the Spice Mobile, and use its GPS to figure out where Chili traveled over the course of the previous week. Turns out, he was dining with reality show producers, which makes Booth want to question WoodySid the producer again. WoodySid explains that he tried to take Chili to rehab, and he jumped out of a moving car, necessitating attention to his shoulder injury in Memphis. The team swabbing the Spice Mobile finds blood that someone tried to clean up, but it ends up being animal blood, as well as perfume from Joanne, a waitress at the Royal Diner.  The Jeffersonian team also finds a crushing injury to the occipital that was hidden under Chili's hair plugs. Joanne admits to the affair, but says it was consensual and she last saw him take off in his van.

Finally, there is a break in the case. A small amount of hemorrhagic staining on the tympanomastoid area suggests Chili may have drowned. Although his lung tissue is too degraded to confirm, the team realizes that the crescent-shaped bruise on the occipital is the same shape as a sink faucet. Apparently his lung tissue is not too damaged to find particulates of aloe vera, soap, and epithelial cells. The FBI questions Morton once more, assuming that he killed Chili because his mother was dying without an organ transplant and Chili was destroying his transplanted organs.  Rather, Chili showed up to Morton's hotel room, drunk and belligerent, and Morton snapped. Chili slipped on the floor, hit his head, but kept attacking Morton, who eventually just held Chili's head underwater until he died.

Forensic Mystery - B-. Lots of people had it out for Chili, but they narrowed on the killer very quickly.

Forensic Solution - B+. Weird pronunciation aside, not a bad episode forensically.

Drama - C-.  There was some Viziri stuff. But lots of guest stars, which was fun to see.