The Putter in the Rough
Episode Summary
A dude tries to kill himself by jumping off a parking garage but stops when he sees a dead body on a grate below.  I guess the parking garage is somehow affiliated with the federal government, because why else would the FBI be called in for this?  Brennan goes to the scene to check out the body; a large part of the frontal bone is missing and the remains have been outside for about a week according to Hodgins.  Brennan mentions the "slanted squamosal of the remaining frontal bone" as indicating the person was male, which makes no sense at all, anatomically or forensically.  The sternal rib ends tell her he was in his mid-30s.  Blood smears on the railing show that someone threw the bleeding body over. 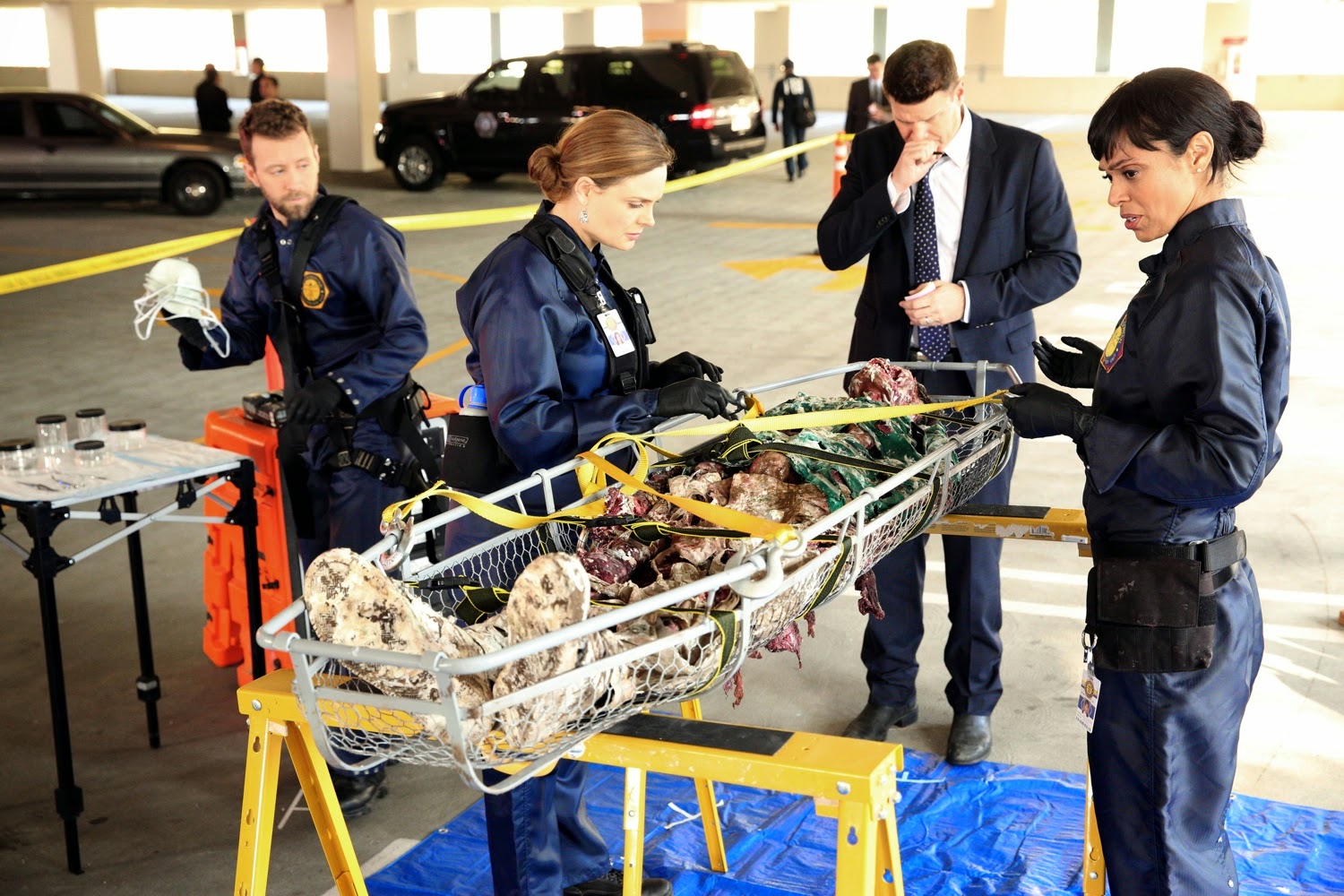 At the Jeffersonian, the team works on removing the bird guano, which is eating away at the bones.  Exposed ligaments at the wrist around the median nerve suggest carpal tunnel, while the exploded front of the skull is the exit wound from a high-powered weapon like a rifle.  Saroyan finds evidence in the liver that the victim took beta blockers, which oddly leads Booth to think this guy was a contract killer, as they use beta blockers to steady their hands in shooting.  The victim doesn't have a cell phone on him, but does have cigarettes, condoms, pencils, and a code book of some sort.

An ID is obtained from the victim's surgical screws. Troy Carter had an unusual fracture of the greater tuberosity of the left humerus whose state of healing suggests it was about a decade ago, and Angela somehow has access to all surgery logs at every area hospital, HIPAA be damned.  Troy's brother Jake, with whom he was in business until recently, reported him missing last week.  Jake reveals that Troy was a professional mini-golfer, hence the carpal tunnel and beta blockers.  He was getting ready for the Mini Master's at Sammy's Tropical Tiki course.  Booth and Brennan go check out Sammy's course and run into a lot of interesting characters including Sammy's wife Lori, the former hand model, father-and-daughter team Eric and Darla Sims, and former pro-golfer Winston Scruggs.  They're pretty much all giant jerks.  Brennan finds traces of blood in the tiki hut as well as small bone chips and brain matter.  She insists it's necessary to bring the entire tiki hut back to the Jeffersonian, because of course that won't disturb the teeny tiny bone fragments in the course of transfer and makes much more sense than bringing in a team of experts for a couple hours to recover what's there.

Back at the Jeffersonian, Wendell finds a small amount of what he assumes to be hemorrhagic staining on the zygomatic, assuming the guano somehow etched it into the bone(??).  Striations on the right clavicle and right 5th sternal rib are postmortem, but he's unsure what they are.  The bone chips are mostly from the shattered face, and the bullet fragments that are found appear to be from the same bullet and are oddly equidistant from each other.  Saroyan found a part of the victim's eyebrow in the hut, and it showed recent sutures that were not done by a doctor.  Remodelled fractures of the right 2nd-4th metacarpals and scaphoid may also have been from the same fight about 10 days prior to his death.  Additionally, Saroyan finds antibodies from Hep B and yellow fever in Troy's blood.  Angela tracks Troy's phone (which I thought they made a big point of saying wasn't found on his body?) and finds out that he was in a relationship with Darla Sims, whose father is a bit of a hot-head.  Eric Sims denies hurting Troy, and Aubrey talks to Darla, who admits to having seen a fight between Troy and someone else.  She gives a description to a sketch artist, and it perfectly matches Troy's brother Jake.  Jake admits to beating Troy up, but not for their failing business but rather his choice to have a relationship with an 18-year-old woman.

Additional information about manner of death is gleaned from some bones that Hodgins and Wendell have to re-wash to get all the bird guano off.  Wendell notices bullet wounds in the right clavicle, one the right 5th sternal rib, and the right humerus.  Along with the head wound, it means Troy was hit four times, from four different angles.  Booth, though, mentions the possibility that Troy was hit with a multiple-impact bullet that split into three separate projectiles held together by kevlar strands.  The killer shot Troy in his upper right arm and then, after Troy tried to run, shot him in the back of the head.  The striations Wendell found on the clavicle and rib are from the killer's attempt to remove the distinctive bullet.  Aubrey checks records of gun and ammo purchases and finds that Sammy has this new kind of bullet.  He and Booth think Sammy might have killed Troy because Troy was planning to go to South Africa (hence the immunization antibodies in his blood), but Sammy insists Troy was his bestie and they were going to South Africa together.  Wendell gives the supposedly hemorrhagic stain to Hodgins and Saroyan, who find that it is actually red nail polish and that the supposed bone chip in the wound was part of a human nail whose DNA is matched to Lori's.  Booth and Brennan bring Lori in for questioning, and she admits to having killed Troy for taking away the attentions of her husband.

Forensic Solution - D. I don't buy most of the forensic stuff they did this episode, from the demographics to the manner and cause of death.

Drama - D-.  Not sure which I cared about least, Wendell's broken clock or Max's stolen ring.  Snore.