The Baker in the Bits
Episode Summary
A guy runs away from someone, straight into a blast zone, and is blown up. The remains are taken to the Jeffersonian, where Brennan determines it is one individual because of the lack of duplication of anatomical elements. According to the narrow width of the greater sciatic notch, Vaziri thinks the victim was male. The victim had a tattoo, and after rehydrating it, Angela is able to run it through the National Prisoner Tattoo Database and gets a match: Connor Freeman, who did five years for attempted murder in a robbery-gone-wrong. Antemortem ligature marks on the scaphoid and triquetral mean his hands were bound, likely with zip ties, and striations on the medial malleolus of the tibia mean his ankles were also bound. 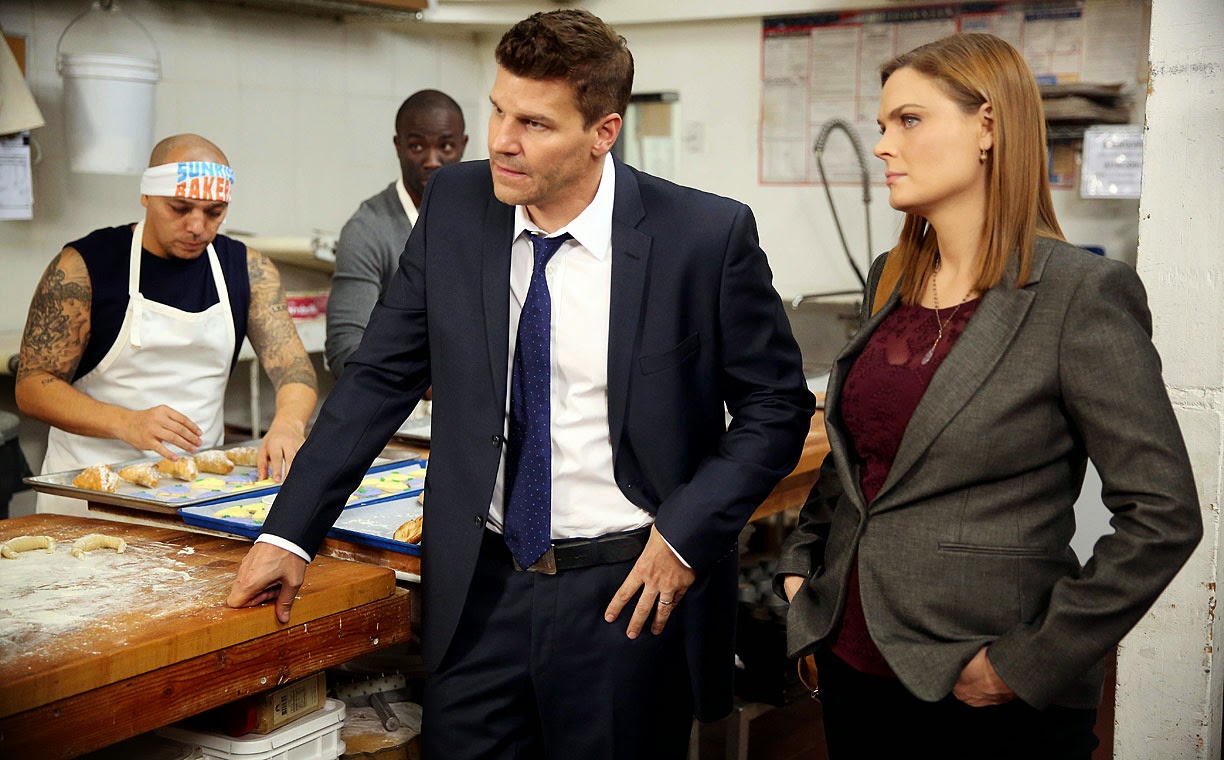 Aubrey goes to visit Freeman's address.  The super lets him in, and he runs into Freeman's girlfriend, Sabrina Clevenger. She didn't report him missing because they'd gotten into a fight and she thought he'd left and was afraid to report it because it would get him in trouble with his parole officer.  Sabrina tells Aubrey that Freeman worked at Sunshine Bakery and was trying to turn his life around. Aubrey and Booth go talk to the owner of the bakery, Randy Disher Roger Flender, who is proud of the work he has done to employ ex-cons and help them start new lives. Aubrey and Booth talk to assistant manager Alex Rockwell, but an employee named Salts suggests they talk to Pemberton, whose sister was shot during the robbery Freeman participated in. Pemberton admits to hating Freeman and to stalking him, but with the hopes of catching him in violation of parole, not of killing him.

Meanwhile, Vaziri finds kerf marks to the clavicles and upper thorax, in the shape of an isoceles triangle. Additional cut marks on the right scapula suggest Freeman was stabbed in a downward motion while restrained - he was stabbed in the back while he ran. Saroyan finds severely depleted levels of ATP in the heart tissue, meaning he was exhausted and had run for about 30 minutes with his adrenaline pumping. She also finds traces of etorphine, an opioid that should have completely knocked out Freeman but clearly didn't because he was a drug addict and had built up a tolerance. The puncture mark at the base of his occipital is likely where the killer tried to inject Freeman. Sabrina admits that Freeman had been doing drugs and that they were having money troubles because of it. The ex-con from the bakery says that Freeman was planning a heist of some sort, of a place where he knew someone on the inside.  Angela and Aubrey check Freeman's debit card records and find that he was using parking meters near a specific check cashing place, casing the joint.  In pulling up an employee list, they find Sabrina's name.  Sabrina admits that Freeman wanted her to leave the back door open so he and another ex-con from the bakery could rob the place, but she refused and they fought, just before his disappearance.

Hodgins and Vaziri then work together on some particulates found in the mental eminence, patellae, and metacarpals, which contain traces of glass with manganese, which hasn't been common in buildings in over 100 years. Angela uses her magic computer to trace Freeman's route backwards, using the particulate evidence, the anatomical evidence, and maps of the area. They narrow down the building where Freeman was held to Scoville Iron Works.  Booth and Aubrey go check it out and find a work table with blood all over it.  They also find three skeletonized bodies in an incinerator and a clothesline with excised tattoos hanging on it. The different levels of burning and calcination tell Brennan that each person was burned for a different amount of time. The pelvic structure of all victims is male, and all were killed in the same manner: with deep incisions to the anterior C6, indicative of slicing the jugular. Angela plugs something in to the missing persons database and gets hits for two of them: Father Douglas Neighbors and Ted Widmer. The latter was also an inmate at the same prison as the ex-con bakers, but the priest is linked only to Alex Rockwell, the bakery assistant manager. The kerf marks on the four victims are identical, and Brennan and Booth narrow down the murder weapon to a northern Indian ritualistic slaughter knife (kukri) common in Afghanistan, where Rockwell was also stationed. Flenders helps Booth and Aubrey lure Rockwell to a parking lot where Rockwell tries to overpower Flenders, but Booth immobilizes him with one shot to the left arm.

Ratings
Forensic Mystery - B.  Better than average.  The plot twist at the end with the extra bodies was a nice touch and unexpected.

Forensic Solution - B. Also better than average.  While the forensics were ok, it was neat to see how they could work in concert with the fleshy bits, as Saroyan added some key clues to the mystery.

Drama - B-. I got excited when the music swelled and Booth and Aubrey found new bodies.  I thought for sure this heralded a new "big bad."  But no.  So that was a let-down.  Also, sad that Vaziri is leaving 'cause I like that character and actor.