The Money Maker on the Merry-Go-Round
Episode Summary
A bunch of dads playing at the park with their kids find a dead body under a merry-go-round.  The whole merry-go-round is brought back to the Jeffersonian, apparently so that some intestine can fall on Saroyan.  Brennan and Wells estimate sex as male from the lack of subpubic concavity, age-at-death as mid- to late-20s from the auricular surface, and white ancestry from the parabolic dental arch. Saroyan puts time-of-death at 2 to 2.5 days before. The dead man had a mouth full of veneers worth tens of thousands of dollars, but no phone or wallet, and his wedding band was missing. There's hemorrhagic staining in the cranium around the time of death. Saroyan and Angela reconstruct the skull and face and get a positive ID: Toby Wachlin. 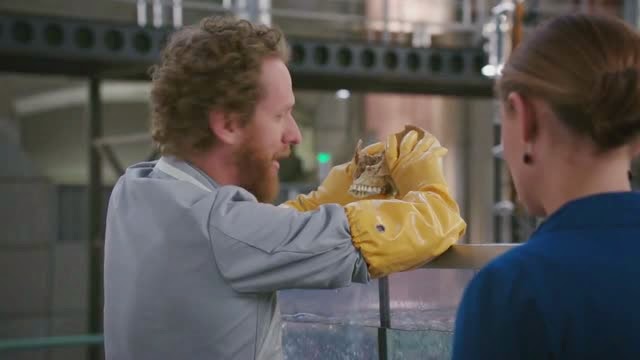 Booth questions Anne Wachlin, but she just returned from a trip. She notes that Toby worked at Horizon Equities, and Aubrey bristles (wahn wahnnnn, sad backstory alert). They go talk to Mason Barnes, who runs the company.  He said that Toby was having issues with Blair Ellis, who has a temper.  Blair denies killing Toby.

Hodgins finds from the lack of playground particulates in Toby's shoes that he was killed elsewhere. Saroyan finds that Toby had a cocaine problem. Traces of an industrial-strength insecticide coupled with pollen from Hungarian oak trees lead the FBI to a house in an affluent neighborhood.  While Wells figures out that there were multiple points of impact on Toby's skull from a blunt object, Booth finds out that Toby was injured in Derek Kaplan's house the night of his death. Wells notes a perimortem injury to the distal radius from a thin, cylindrical object that came to a point. Angela looks at Kaplan's bedroom and thinks the weapon may have been the candlestick.  Toby was in the bedroom with an escort.  The escort admits to having stabbed Toby with the candlestick, but denies killing him.  He owed her money for cocaine, so she took his wallet, cell, and wedding ring as collateral; he wanted the cell phone back desperately. Angela needs Toby's iris to unlock his phone, so Saroyan reconstitutes it with saline. Once in, they find evidence that Toby's boss was trying to bribe the chief technical officer at the stock exchange to put their computer closer to the server. Wells finds hemorrhagic staining to the right side of the mandible, circular and 25mm in diameter.

Booth heads back to Horizon to arrest Barnes for securities fraud. Barnes denies killing Toby. Brennan finds blood on Barnes' desk and doorknob, but he insists that anyone could have come into his office because it's unlocked. Wells goes back to the wounds and finds that Toby was hit 9 times; Brennan hypothesizes that the skull may have fractured along the suture lines and that that fracture may have cut the killer. Within the sagittal suture, they find a fragment of emerald.  Booth realizes it's a ring that Ellis wears, and they call him in for questioning.  He admits it pretty quickly: Toby was sneaking into Barnes' office to take money to give to the escort/coke dealer, and Ellis was annoyed that Toby wasn't playing well with others.

Ratings
Forensic Mystery - C+. Pretty clear who did it from the get-go.

Forensic Solution - B-. Eh. Not much forensic work in this episode. Pretty tidy all around.

Drama - C. I aggressively don't care about Aubrey's back story.  I kinda liked him better before they tried to give him depth.

Unknown said…
The mention of his veneers made me think he'd be exposed as a former meth addict who got rich quick. Seems like a missed opportunity...
16 November, 2014 11:42