The Geek in the Guck
Episode Summary
Two tween boys trying to evade their parents' internet block manage to find a dead body on a satellite map of the shore along the Potomac River. Offscreen, the body is recovered and brought to the Jeffersonian.  Brennan and intern Jessica Warren see a narrow sciatic notch and partially defined lower extremity of the pubic face to conclude that the individual was a white male in his 20s. Hodgins estimates based on blowfly larvae that the body has been on the bank for two and a half days, and Saroyan places time-of-death at 6 days ago. Hodgins notices that the removal of the victim's eyes, nose, lips, and ears was likely the result of taphonomic processes -- namely, predation by an eastern snapping turtle. 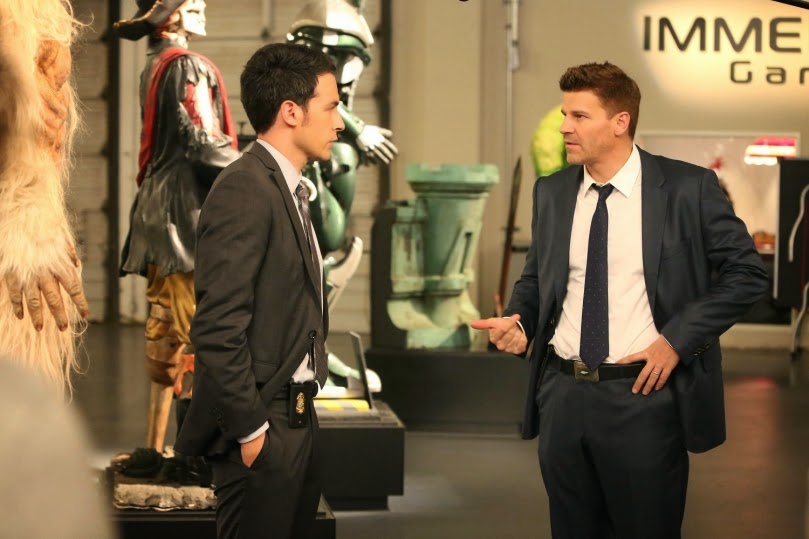 On closer examination, the team finds the victim has perimortem injuries suggestive of a beating, and his arms were torn off.  There is also a fracture to his right temporal as well as fractures to lumbar vertebrae 3 and 4. There's blue discoloration on his incisors, and his last meal was Chinese food.  Angela manages to reconstruct the face by approximating the soft tissue that was eaten, and the super spinny skull comes back with a missing persons hit -- Hayes Robertson, a multi-millionaire video game designer.

Booth and Brennan go to visit Noah Gummersoll, Hayes' roommate.  He didn't know Hayes was dead and only left the house twice in the last three months. He has a joint checking account with Hayes and therefore stands to inherit all of his money; Noah denies having anything to do with Hayes' death, though.  Booth and Aubrey then head over to Hayes' work, Immersion Games, to talk to his fellow programmer (and Noah's former girlfriend) Anne Schamberg. She shows them where the fight-actors play out game scenarios in motion-capture suits.  She also introduces them to Jen Parker, the CFO who seems to hate Schamberg and refuses to talk to Booth and Aubrey, handing them her lawyer's card instead.

Back at the Jeffersonian, Warren notices a ring fracture to the base of the skull.  She suspects that the temporal fracture they initially thought was an exit wound from a gunshot was actually the result of blunt force trauma sustained when Hayes' body was thrown into the Potomac from a great height. Hodgins decides to build a human slingshot rather than use the Angelatron (or simple math). They reason that the killer dragged Hayes' body to the bridge, tied weights on his arm, and threw him off. Based on their experiments, the bridge was 85 to 90 feet high. This leads the FBI to the bridge in question, and they find Hayes' arms, which Hodgins and Warren deflesh after noticing deep perimortem lacerations and defensive wounds on the arms and hands. Warren also notices remodelled microfractures along the sternal rib ends bilaterally, especially ribs 6 and 8, along with two additional fractures on rib 4 on the right side.  She suspects these were caused by punching.

Booth and Aubrey confront one of the fight-scene actors on stage at Immersion Games, as he is seen punching his opponent in the same way that would have caused the injuries to Hayes.  He admits to have beaten up Hayes one night when he saw him on the street, as he felt Hayes stole his idea for a game.  But when a diamond bracelet tumbled out of Hayes' pocket, he decided not to fire the fight actor and said all was forgiven. Angela hacks into Hayes' computer and into his cell phone to find that he went several times, in the middle of the night, to a specific address. Aubrey finds that Chloe Blanchard was on the lease; Chloe is Noah's new girlfriend. However, when they track down the last occupant of the apartment, it was someone named Alice Kelly.  She does not recognize Noah, although he recognizes her. It comes out that he never met her, just saw a picture and chatted with her online.  Booth realizes that Hayes was catfishing Noah so he could control him and break him and Anne up.

Warren finds some further fractures to the carpals where the arms were tied to a heavy weight.  But it's the fracture to the humerus that gives them cause-of-death: a splintered fracture caused by blunt force trauma from a rounded object would have lacerated the subclavian artery and caused Hayes to go into shock and bleed to death. Grey paint found in the humerus is similar to that found on the motion-capture suit balls, and Brennan suspects that the shield used in the fights was the murder weapon. Based on the Angelatron, and using the motion-capture from the weapon, they find the murder was likely about 5'8" and 120lbs, right-handed, but weaker on the dominant side. Brennan and Booth subpoena Anne's medical records and find that in high school she suffered a bad injury to her right knee, which caused her to compensate with her left side. Her height, weight, and old injury line up with the profile of the murderer.  Under interrogation, Anne admits to having killed Hayes with the motion-capture shield because he had broken her and Noah up, saying that they were just pawns in his game.

Ratings
Forensic Mystery - B-. Mystery was alright, I guess.  No sense of urgency in it, though.

Forensic Solution - B. Everything but the entrance/exit wound issue seemed reasonable.

Drama - D+. Again, no sense of urgency in catching a killer.  Everyone was super civilized about everything. And the plot was super confusing.

Fortunate Cookie said…
Noah said "Chloe" was trying to break up with him AFTER Hayes died. It's why he thinks that it makes no sense that Hayes was trying to catfish him. Presumably, Anne took over being "Chloe" so that she could free Noah up to resume their prior romance.
21 October, 2014 20:18

Fortunate Cookie said…
As for the apartment, Hayes rented it under the fake name "Chloe Blanchard" and only ever stopped by to see if Noah was sending anything. Nobody cleared out of the apartment, because no one ever lived there. As for Noah, dropping by, I suppose the thinking is that Hayes would always have his finger on what Noah was doing through "Chloe" and of course, himself. Although, it does seem strange that Noah would dump a girlfriend with whom he was thinking about living for an internet girlfriend. Also, um Facetime, Skype, and even the telephone exist so...the plotting is a little thin. The real girl, Alice, would never have lived there or known anything about what had happened until Booth figured it out.
21 October, 2014 20:34

This was just LAZY writing: WTF!!!: Ditto to all the above id'd FLAWS in the plot / writing - plus:

clearly the Anna-Hayes fight was not intentional murder; NOTHING – NOTTA – no dialogue to that effect – agh!!... agh!!

Based on the location of the humerus fracture, the sharp bone fragments would have lacerated either the distal axillary artery or the proximal brachial artery, not the sublclavian.
10 February, 2017 16:05