Skip to main content
Posted by Kristina Killgrove May 19, 2014

The Recluse in the Recliner
Episode Summary
Booth gets a call on his secure line from someone who wants to meet, who has information about the MacNamaras. When he gets the call traced, he finds out the fire department is already there -- the person exploded in a mobile home, and parts of the body are fused to the vinyl. At first glance, it looks like the person drank heavily and then passed out while smoking, combusting. Brennan finds a zygomatic process and concludes the person was Caucasian; she doesn't ever determine sex, but she refers to the person with male pronouns. Booth notices that the circuit breaker is fused in the off position, making him think it was not an accident. Someone knew the man had something to tell Booth and didn't want him to. 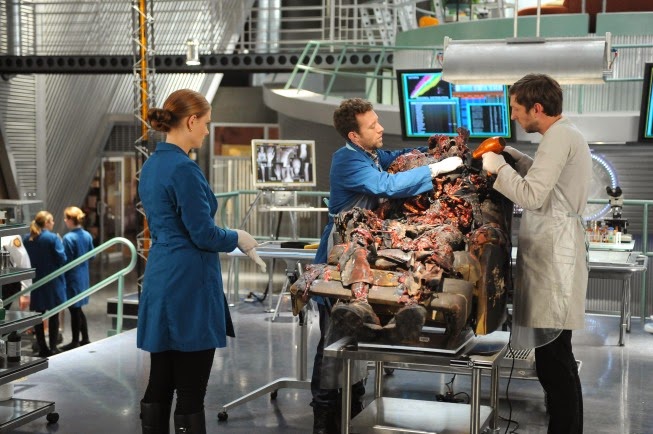 At the Jeffersonian, Fisher estimates from the pubic symphysis that the victim was in his mid-30s. A facial reconstruction done using Angela's magic software on shattered bone gets her a hit: Wesley Foster. Saroyan looks at Foster's lung tissue and concludes he did not die of smoke inhalation. Foster was a journalist but then got all conspiracy-theory-nutty, lost his job and his wife, and started working as a janitor at Cryus Security, which was owned by the MacNamaras. Brennan, meanwhile, finds perimortem chipping to Foster's teeth which she thinks happened when he had a tube or funnel forced into his mouth. Fisher thinks he may be able to swab and get epithelial cells from the killer.

Angela is upset that the killer took Foster's hard drive, but Hodgins reminds her that conspiracy-nutters would have a backup somewhere. While picking through body debris in the trailer, which has been installed at the Jeffersonian, Fisher finds Foster's nipple and Hodgins notes that the material the nipple ring is made out of is not normal: it's a memory chip. Perimortem fractures to Foster's 8th and 9th ribs and sternum suggest someone aggressively tried CPR; Brennan thinks that Foster was being tortured for information. Angela gets much of the data off the chip, and it includes bank records, confidential email, photographs, and all manner of compromising information. Booth recognizes a photo as one he took; Angela finds out that the girl in the photo, who was shooting up, was the daughter of a senator. Booth had been lied to about the reason he needed to take the photo.

Saroyan finds epithelial cells from three different men on Foster's body.  While she can tell their sex and their race, she does not get a hit in a DNA database. Brennan notes that there are no ligature marks on Foster's body, which means two of the men held him down while the other tortured him. Fisher thinks that the fracture to the third cervical vertebra feels odd; Brennan recognizes it as a take-down strangle-hold used by Delta Force operatives. Although their DNA is erased from the system, Saroyan thinks she can work backward to find out which operatives' information was erased. Hodgins finds a fragment of Delta Force watch band in the vertebra.

Booth, meanwhile, is in front of the congressional hearing to appoint him as head of the German branch office. Everything is going smoothly until Congressman Hadley, with whom Booth had had lunch the other day, turned on him and asked about his killing of a U.S. citizen in Pakistan in 2006. Booth is caught off guard because that was highly classified information and he is not allowed to even respond to the charge. He and Brennan run past the press, and Stark puts him on administrative leave. Booth packs up his office, but he also approaches Hadley, who he found out is gay from pictures Angela found on the nipple-ring-memory-chip. Hadley then calls a burner phone to relay Booth's assertion that he won't give up.  Angela traces the call and realizes they're sending the team out to dispatch Booth. Brennan takes Christine to Max's while Booth puts explosives around the house. Fisher finds out from Foster's wounds that two of the Delta Force guys are right-handed and one is a leftie.  He tells Brennan this, but she realizes she can't call Booth.  There's a giant shoot-out at Casa de Booth & Brennan, and Hodgins manages to get the rest of the goo off the nipple-ring-memory-chip and the team finds out that the three judges who prevented Miss Julian from getting a warrant are on the chip.

Booth manages to kill two of the Delta Force operatives but gets shot so is struggling with the third because of his injuries. Brennan shows up, since she thought the handedness information might be relevant, and shoots the third.  He doesn't die and comes for Brennan; Booth gets him down and breaks his neck, though. Booth codes on the table in the OR, but the medical team brings him back. Brennan sneaks in to see him in recovery and notices he is handcuffed to the bed.  Stark asserts it is because Booth killed three FBI agents for no good reason.  And that, folks, is the Season 9 cliffhanger!

Ratings
Forensic Mystery - B. There was a lot going on, and the mystery is still mysterious, but the plot definitely seemed overwrought.

Forensic Solution - I. (Well, I give students who don't finish all of their work for my classes an incomplete for a grade.)

Drama - B+. You knew Booth wouldn't die, but the handcuffs at the end were a nice touch. I might actually be interested to see how this resolves next season.

Well, thanks for sticking around for Season 9, dear readers.  I think Season 10 is supposed to be the last, so I might as well see this through to the end.  As with this season, though, I may post late because of work and life and such.  But I'll be back in the fall when Bones comes on again.  Have a good summer!

Jessica Galea said…
Thanks for doing these, Dr. Killgrove. I'm still waiting for grad school to come into focus, so your whole blog has been a great reminder that the wait will be worth it. It's been a few months since I've worked with physical human remains (mostly been CT scans lately), and gosh, there's nothing I'm as happy to be doing as that. So thanks for being an inspiration :)
22 May, 2014 20:24