The Carrot in the Kudzu
Episode Summary
A body encased in kudzu is brought into the Jeffersonian. Hodgins works to free the bone from the fast-growing invasive plant before its root system disarticulates the bones. Based on the size of the second cervical vertebra, Brennan guesses the person was male. Dr. Edison notes the angular eye orbit and guesses Caucasian. Although there was a lot of animal predation, several large fragments of organs remain for Saroyan, including the prostate, confirming Brennan's sex assessment. Based on decomposition, Saroyan estimates the man has been dead for six days, but Hodgins estimates nine based on the kudzu growth.  Booth and Sweets discuss the details of the discovery: a car drove up to an embankment along a state road, and the person dumped the body, horrified. Edison catalogues all the injuries to the skeleton. The man suffered sharp force trauma to the parietal, struck from the left with a heart-shaped object.  Booth gets a DNA match for Joe Starkle. 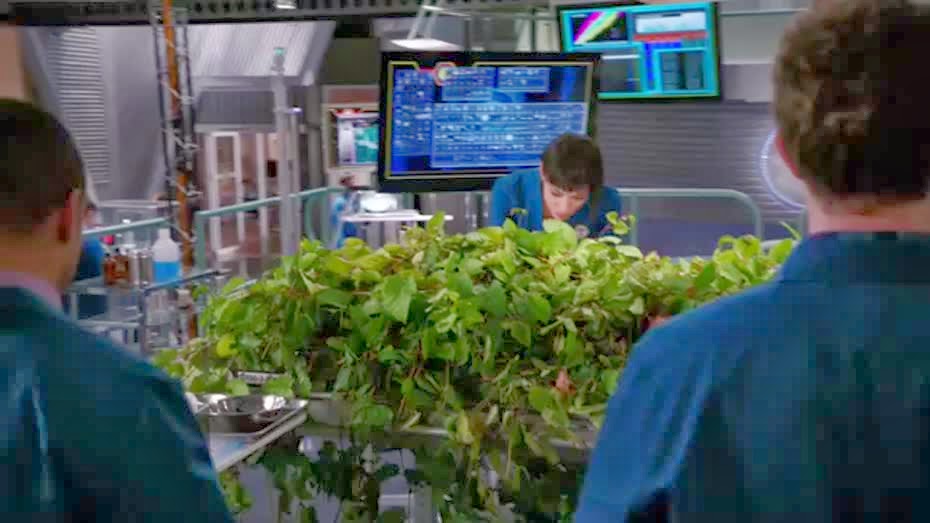 Booth and Brennan head to a TV studio to interview Joe's brother, Ken. Both brothers were involved in the kids' show VegetaBills, a program with dancing vegetables all named Bill. Ken confirms that Joe worked there until fairly recently, when he left to start a new show called Mirthquake Village. That program did not turn out well, though, so Jake the producer pulled the plug on it. But Jake admitted to causing some of the injuries that Edison found: remodelled fractures to the radius and ulna bilaterally, as well as 5th and 8th ribs, mandible, and zygomatic.  Jake insists he was simply standing his ground after Joe attacked him.  Booth finds that Jake has a solid alibi, though.

Meanwhile, Hodgins finds motor oil, cement, and traces of asphalt on Joe's body, and Angela finds information on the Twitter feed of Carrot Bill, the vegetable that Joe had portrayed on the show. A woman named Debra Ann Volker seems to have been cyber-stalking Joe and sending him at times threatening and at times sexually suggestive emails. She insists that she watched the show with her 6-year-old son and that they both got healthier from their shared interest in the program. When Joe left the show, Debra was afraid she might gain the weight back. Sweets notes that Debra has an obsessive addictive disorder but likely did not kill Joe.

Brennan and Edison delve further into the fractures on Joe's skeleton and find remodelled injuries to the body of the sternum, the xiphoid process, and surrounding ribs, suggesting he underwent CPR chest compressions at least a month prior to the injuries he sustained in the fight with Jake the producer. Since there were no Colles' fractures to the distal radii or fractures to the humeral heads, Edison concludes that Joe did not break his perimortem fall. Saroyan's toxicology screen, however, was clear, so they suspect Joe had a heart condition. Brennan finds that Joe had been diagnosed with Long QT syndrome, which put him at increased risk of torsades de pointes; these episodes can lead to sudden death and are provoked by external stimuli, like surprises and loud noises. Although Joe had controlled the condition using beta-blockers, the tox screen showed he went off them, presumably because impotence is a common side-effect.

Around the time of his death, Joe decided he wanted his old job back. He talked to Henry Munsen, the producer of the VegetaBills show, but he had already given the job to his son, Tommy.  Booth questions Tommy, but he wasn't invested in the carrot character; he was simply after all the women who flocked to the show with their kids. Joe, Tommy insisted, was always taking up with new women. Angela ran Joe's credit cards and saw similar activity patterns as Marilyn Starkle's cards; she assumes Joe was having an affair with his brother's wife.  Booth confronts Ken Starkle, who admits his marriage was open and he knew about the affair. He did not know that Joe was off his medication.

Hodgins finally finds a bunch of particulates from animals, and he and Angela think that Joe died in a parking lot at the television studio, since a kids' show called Charlie's Barnyard also filmed there. Brennan and Saroyan find blood on the parking curb, suggesting Joe fell and hit his head. There are skid marks leading away from the lot, and Booth endeavors to track the tires to get a car make. But Hodgins finds in the particulates ingredients specific to Susie James Cosmetics, the company that Debra Ann Volker works for. The FBI turns up Joe's blood and DNA in her car, and she confesses the story.  Joe wasn't interested in sleeping with her, so she drove into the parking lot in her electric car and ended up startling him by honking. He simply dropped dead then and there.  Debra panicked and dumped the body. Brennan points out that Joe's death is Debra's fault; be that as it may, it was still clearly an accident.  Debra couldn't have known that Joe had a heart condition or that he wasn't taking the medication that could save his life.

Ratings
Forensic Mystery - B-. I guess it was a reasonable mystery. I was kind of busy rolling my eyes at all the whiny birthday stuff to pay close attention, though.

Forensic Solution - D. After a whole bunch of crappy forensics, Booth simply got an ID through DNA. Much of the stuff Edison saw and did was convenient for the plot but not good science.

Drama - D. The writers are trying really hard to make me care about the Booth-Brennan home dynamic, but I simply don't. I do want to throw poor Sweets a birthday party, though.

Mark Clemente said…
Right as soon as she used the axis to determine sex I thought it was ridiculous. That's a HIGHLY improbable determination to make off of just a single bone. Poor forensics on this one.

Also, am I the only person that thinks that it is odd how quickly Christine is growing up? I mean sure this is TV and days are quicker on TV than in real life, but if this is supposed to be her 1st birthday then she would NOT be that big. Or talking that much. She was running around and talking like she was 5 or so. I'm very disappointed with this episode. I watched it anyways, but that's because I've watched every episode from season 1.
25 March, 2014 23:32

Unknown said…
They did age Christine too fast. She was at least three or four when Sweets died. And she was 6-7 at Cam’s wedding in s12.