The Heiress in the Hill
Episode Summary
A giant chunk of dirt and bones is delivered to the Jeffersonian from Antietam Battlefield Park. Based on one of the right tarsals, the skeleton is female. Her right pinkie toe was severed prior to death. Although the remains were doused in lye to speed decomposition, Saroyan places time-of-death at around 24 to 36 hours ago. Brennan notes that the tooth-to-pulp ratio means she was in her mid-20s, and the angular nature of her eye socket means she was Caucasian. Damage to the teeth suggests someone was trying to ensure she wasn't found, and it means that dental records won't help ID her. 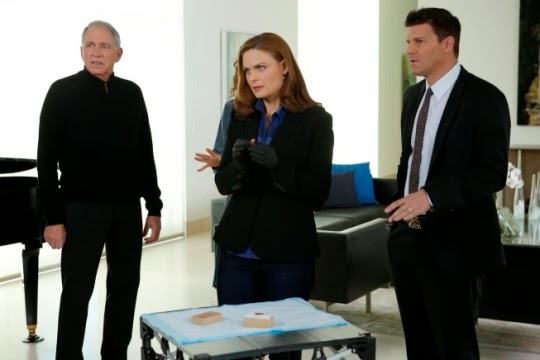 Much of the trauma to the victim's skeleton is perimortem. There is repeated trauma to the back of her head along the sagittal suture, but it is not the cause of death. Saroyan finds a DNA match - Lauren Frank, whose father is the CEO of a software company. Booth and Brennan talk to Mr. Frank and his wife, Lauren's stepmother. They had recently received Lauren's toe in the mail from a kidnapper and were told not to contact the police. The angle of the incision on the toe that the Franks have and the incision on the body in the Jeffersonian match. There was no sign of struggle in Lauren's room, however, and the security alarm was not set in her room. Booth takes Lauren's computer back to Angela, who finds out that Lauren's last appointment was an afternoon Spanish tutoring session. Booth questions Maurizio, the tutor, who insists he and Lauren were planning to run away to South America together but that he didn't kill her. Booth returns to Lauren's house to question the guy who's in charge of the house and sees Buddy the dog-walker sneaking in over the wall because he forgot his key card. Buddy tells Booth that Lauren wanted to escape her family and that she had seen her stepmother having an affair with her personal trainer.

Back at the Jeffersonian, Fisher notes microfractures on the pisiform, triquetrum, and lunates bilaterally, as well as on her calcanei. Coupled with the cranial fractures, Brennan realizes this could have been from Lauren having a seizure. Booth digs deeper into the stepmother's life. She had taken out a kidnapping policy on her whole family, but it turns out that Lauren's father actually did it and put it in her name. Angela manages to track the cell phone that was making the texts to Lauren's father... and it was inside Lauren's house. Brennan and Booth find Lauren's phone in the stepmother's home gym. But since the stepmom is not computer savvy and the phone was sending automatic messages, Booth does not think she did it.

Hodgins finds evidence of rust in the osteons and canaliculi of Lauren's bones and sets some dermestid beetles on the remains to deflesh them. When he tests the beetles, he finds high levels of penicillin. The saw marks on Lauren's ulna and C7 that were made postmortem suggest hesitation marks, as if the person who did it knew her. Brennan notes that Lauren had a particularly virulent strain of tetanus, likely from the implement that severed her toe. Penicillin, while useful for fighting infection, could have harmed Lauren, who was allergic to it according to her medical chart. DNA on Lauren's toe comes back as belonging to her dog. When they test Buddy's grooming clippers, they find that they were used to cut off Lauren's toe.  Buddy spills the whole story: Lauren wanted to get money from her family so orchestrated the whole kidnapping. But when her toe got infected after she cut it off, Buddy got her penicillin from the vet's office, since she didn't want to go to the hospital. The penicillin made her sicker, and she had a seizure and died. Buddy tried to dispose of her body. Ironically, Buddy thought that he and Lauren would run away together, but she was setting him up for the kidnapping so that she could get away with Maurizio.

In the B plot, Hodgins has a long-lost brother who has only come into his life because he is institutionalized with schizoaffective disorder and Hodgins' trust hasn't been paying the bills since he lost all the money.
And in the C plot, Brennan makes a lot of money, and Booth doesn't, which makes him whiny. He first wants to give Brennan's book advance to Hodgins and Angela for the new brother, but they decline it so Booth donates it to the Wounded Warrior Project.

Ratings
Forensic Mystery - C. Pretty obvious Lauren orchestrated it. Other than kerf marks that weren't ever fully explained, there wasn't much forensic stuff going on in this episode.

Forensic Solution - D. Age-at-death and sex estimations were super sketchy, as were some of the perimortem injuries.

Drama - C-. Not sure why the writers feel the need to inject a brother into Hodgins' life. The whole plot reminded me of a Kingdom episode. And yeah yeah, Brennan makes loads of money from her books.

Madhatter360 said…
What ever happened to Brennan giving a quarter of what she makes from her books to Angela? Given that they wanted to give the money from her advance to Angela and Hodgins, it seems like someone would have mentioned it.
02 February, 2014 22:07

Kristina Killgrove said…
Whaaat? I totally don't remember that. What did Angela do to warrant 25% of her book royalties?
02 February, 2014 22:19

George Myers said…
"My brother was an only child." I thought Jack should have announced that he was his brother to Jeffrey first instead of the perhaps too personal and perhaps connected unconscious or subconscious mind link, with the amnesiac memory Jack or Jeffrey might have from a shared and forgotten trauma, i.e., vehicle accident, or other. It seemed to set Jeffrey off.

"Take my wife's $ please" to Wounded Warrior reminded me if the FBI hdqrs still has its dumpsters accessible from the street. A nice gesture in the script, but at tax time? Does the show donate?

I read recently on-line that skulls are being read from a database whose characteristics can place where for example a Hispanic male came from, i.e., South America or Mexico from its features.
03 February, 2014 04:41

KAN said…
At some point, I believe fairly early in the series, it was revealed that Angela helped write all the sex scenes in the books so Brennan decided she should pay her a portion of the royalties.
03 February, 2014 19:34

pinkeysegun said…
you are right kan, i thought people like the book cos of the sex scenes, well not the case when they went to Argentina, Brennan is so smart rich, annoying yet loved worldwide what else? give her a laso and bracelet and call her wonder woman?
shame jack cruel parent left billions to jack and not even a trust fro their hidden disabled son. sometimes i wonder if the writers are hodgins bugs.
good blog btw with your reviews i think you will write a more consistent and factual story.
10 February, 2014 10:54

Jables said…
The Angela's royalties thing comes from season 5, episode 15, "Bones on a Blue Line". Bones finds out for the first time that the thing everyone loves about her books is the crazy sex in them, which Angela composes while laying on Brennan's couch sipping wine and... fantasizing, I guess. She has her publishing company cut the check if I remember correctly, so it's possible that that's why it didn't come up, and perhaps it was only for the book in that episode.