The Fury in the Jury
Episode Summary
The Jeffersonian team is wrapping up one forensic case and about to start on a second one, while Dr. Brennan is serving on a jury. On trial is Peter Kidman, a professional soccer player, who is accused of having killed his wife, Charlene, with a kitchen knife in their home. There is no forensic evidence linking him to the crime, however, and a star witness, his friend Christopher Barnes who lived in his guest house, is going to be testifying for the defense. Kidman's sister Allison also backs up her brother's story and his love for his wife. Brennan heads to the Jeffersonian when released from court but is quickly called back by the judge, who sequesters the jury due to new information he cannot let the jury find out. The rumor is that Barnes is planning to switch sides, testifying for the prosecution. 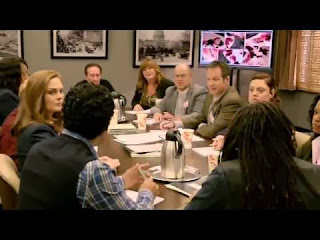 Meanwhile, the body that the Jeffersonian team is working on was found in water and is wrapped in some sort of synthetic fabric. Brennan notes that pieces of the mandible, maxilla, and glabella are missing owing to some sort of blunt (force) trauma, so facial reconstruction will be impossible.  Length of the long bones and the sternal rib ends suggest the victim was male and in his mid-30s. The seventh rib shows a glancing blow from a gunshot. Based on decomposition and partial rigor, Saroyan estimates time of death at 32-36 hours prior. Hodgins notes that hatched trochophores confirm this estimate. The condition of the lung tissue and epiglottis tell Saroyan that the victim was not dead before he hit the water. Daisy finds a .38 bullet lodged in the gluteus medius; neither that one nor the one to the rib would have been the cause of death.

Booth initially nabs a fisherman who was recently busted on a charge of carrying drugs.  The fisherman insists he didn't know he was carrying drugs; he simply took money to drop off a package.  But because the package was dropped off near where the body was found, Booth and Sweets are skeptical.  The fisherman also has a bloody baseball bat on his boat, which he says he uses to kill fish. The fabric on the victim, however, does not match the traps that the fisherman uses.

Daisy finds lipping on the victim's ilia and bony projections on his auricular surfaces, suggesting a vigorous, repetitive action like horseback or motorcycle riding. Further, some discoloration on the femur suggests a bone graft that was obtained approximately two years prior. Saroyan thinks they can extract DNA from the graft and use it to trace the graft to the hospital in which the procedure was performed. They find out that the graft was from a cadaver, and the recipient was Christopher Barnes, one of the key witnesses in the trial Brennan is on the jury for. Barnes rode motorcycles every weekend with Kidman, and they both got into an accident a couple years back, necessitating a graft for Barnes and giving Kidman a hip injury. Kidman put Barnes up in his guest house and helped with his medical bills. Due to legal reasons, though, Saroyan and Booth cannot tell the court about this new discovery, so no one knows why Barnes isn't showing up to testify.  In the jury room, Brennan manages to convince the other eleven people that there is reasonable doubt in Kidman's case. They return a verdict of not guilty, and he is released.  In the car on the way home, Booth tells Brennan about Barnes. She realizes the importance of that finding to the case and starts to question her decision to render a verdict of not guilty. If she can finger Kidman for Barnes' murder, however, she feels that she can settle the score.

Hodgins meanwhile finds that the fabric on the remains was a dust cover for a car or other vehicle, and it has particles of some sort of pesticide(?) spray on it. He also finds ginkgo biloba and pollen not native to the area, so he wants to figure out where Barnes was killed. Daisy helps by extracting bone marrow in order to look at the diatoms. Hodgins indeed finds a specific kind of algae, Didymosphenia geminata, which appears only in fresh water, and thinks it may have been from the cold water discharge pond from a nearby electrical plant. Testing the algae in Barnes' lungs comes up with the same species, and the diatoms confirm this. When the pond is searched by the FBI, a rock with blood and tissue on it is found at the edge, as is a citrine gemstone.  In checking into Barnes' laptop, Angela finds that he was soliciting one-night-stands online. She tracks an email from "Kinky Kelly" to the public library through the IP address. Then, using the time stamp on the email and the library's security camera, she finds that the woman who sent the email was Allison Kidman, Peter's sister. Indeed, the trees on Allison's street were sprayed around the same time as the murder. Booth and Sweets bring Allison in for questioning about Barnes' murder. Although she breaks down, she doesn't say anything on advice from her laywer.

Daisy and Brennan work to establish a pattern and scenario from the remaining injuries to Barnes' skeleton. A small bullet track is seen on the talus; it would have severed Barnes' achilles tendon, making him unable to escape his attacker. Hairline cracks on the third and fourth lumbar vertebrae could have come from someone with a powerful kick, so Brennan again thinks that Kidman was involved in Barnes' murder. Hodgins shines a black light on a pair of boots the FBI got from Allison's house and sees blood. However, Brennan is convinced that Allison couldn't have killed Barnes on her own, especially since she was at least a foot shorter than he was. She assumes that Allison called Peter to come help. Kidman, however, has an alibi. Because of the high profile nature of the trial, he has been under constant media scrutiny. On the night of the murder, he is seen receiving a pizza, and then he's not seen again until the next morning, when he comes out to pick up the paper. However, his bodyguard is seen coming and going around the time of the murder. Brennan realizes from the different gait in the footage of the guard entering and leaving Kidman's house that Kidman dressed up in his bodyguard's clothes and left. Kidman's motorcycling accident left him with a hip injury, which caused his peculiar gait.

Brennan and Booth confront Kidman with this information.  Kidman admits to having left the house in his bodyguard's clothing. But then Brennan shows him the brooch from the bodyguard's jacket.  It is missing a citrine gemstone which, by Kidman's admission, puts him at the scene of the murder. His lawyer is pissed that he just admitted essentially to have killed Barnes.

Ratings
Forensic Mystery - B+. Tying in the dead body and the trial was nice. But the real mystery was not who did it but how.

Forensic Solution - A-. The forensic findings were all pretty reasonable and helped solve the case.

Drama - D. So I'm giving this grade for the non-forensic part of the plot. While I was watching it, the plot was ok, but in reviewing my notes, I had so damned many questions about, well, everything that I couldn't give it much higher than this. So confusing, from the legal issues to the specifics of the murder.

Next week: Apparently some school is making unwitting cannibals of its students.  Should be interesting!

Anonymous said…
I give the plot an F. I can't remember a worse episode. Why is it that everyone at the Jeffersonian KNEW the soccer player was guilty? The Jeffersonian clearly didn't work on the case, or Brennan wouldn't have been on the jury. So how did they KNOW??? No witnesses and everything was circumstantial. And why was Brennan so upset about voting him Not Guilty. If the case wasn't there, then she did the right thing. It would have been so much more interesting to have them all proven wrong in the end? Maybe teach America a lesson about "Innocent Until Proven Guilty"???
17 November, 2013 03:54

Anonymous said…
"how was he still playing soccer?"
I thought they said he was a retired soccer player
17 November, 2013 13:09

pinkeysegun said…
broken bone and still plays football (soccer as u say), why would an athlete engage in dangerous sport that could affect their career??
10 February, 2014 05:52

Anonymous said…
I'm watching a repeat of this episode now -- I honestly don't remember much about it from before. I think the reason they couldn't tell that Barnes was dead was because they didn't know until after both sides had rested and the jury was deliberating . Can't introduce new information at that point.
13 July, 2017 15:27