El Carnicero en el Coche
Episode Summary
Two tow truck drivers argue over who gets to tow a burned-out car. One cedes the job to the other, however, when the first one notices a dead body in the car.  The Jeffersonian team is called to the scene.  Based on the supraorbital ridge, Brennan thinks the person was male, and the prominent malar and intermediate nasal spine suggest Hispanic.  They find a meat cleaver on the floor and ask to bring the whole car to the Jeffersonian, as the seat and metal have fused around the bones. 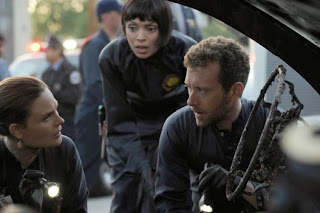 At the Jeffersonian, Wendell is helping with the case.  He notices an open fracture to the right parietal just above the squamosal suture indicative of sharp trauma.  However, there's no evidence that the cleaver was used on the victim. He then revises his estimation to be projectile trauma; the heat of the fire enlarged what was a small bullet hole. Hodgins, in deconstructing the car, finds a bullet jammed in the roof support.  He also finds the VIN of the car, which belonged to a Mr. Middlebury, whose only alibi is that he was trying to buy cocaine for a lady friend and who is never mentioned again. Further examination of the skeleton reveals fracturing to one of the patellae perimortem; Wendell suggests it may have been from a crowbar or club. Meanwhile, Angela uses the skull and factors in heat and length of time the car burned to come up with a positive ID: Jamie del Campo, a member of the Estrellas Locas gang. del Campo is known as "el Carnicero" -- the Butcher -- because of his propensity for cutting off his victims' head, hands, and feet and scattering them around town. They also find a pair of diamond earrings and a curious indentation on the anterior surface of C1.

Booth enlists the help of Sweets to go talk to del Campo's girlfriend, Maria Alvarado.  Maria denies having anything to do with del Campo. Sweets recognizes her son, Javier, from the community center at which he has been working, after Booth almost shoots the kid. Back at the FBI, they learn that the gun that killed del Campo was a Rossi snubnose .38. Gangs use so-called "library guns" where someone checks one out and returns it, as this muddles the chain of evidence for police and FBI. The only local gang not shot by this gun is the 520 Mafia. Booth and Sweets go talk to Curtis Martin, their leader. During their porch chat, a couple Estrellas Locas drive by shooting at them. Booth and Sweets get down, and Martin kills them with an unlicensed semiautomatic.  Booth disarms and cuffs him, then brings him into the FBI. But Martin denies that the 520 Mafia had anything to do with del Campo; rather, he says that one of the Estrellas was talking to police.

Back at the Jeffersonian, Brennan and team finally figure out the cause of death.  Although Wendell found what looks like a second bullet entrance wound, there was only one shot.  The bullet nicked the C1 and winged sideways, exiting through the parietal and making it look like an entry wound. The shooter was in front of and below del Campo. The Jeffersonian then gets the head of a seventh victim killed with the same gun: Adrianna Garcia. A bullet entered her parietal and killed her. Kerf marks on her decapitated head suggest a heavy blade. Miss Julian suggests that Garcia was sleeping with del Campo, but del Campo and the other Estrellas found out that Garcia was talking to police. The fracturing to Garcia's right zygomatic matches the fracturing on del Campo's patella, meaning he kneed her in the face hard enough to break his kneecap and her cheekbone.

Booth thinks he has put two and two together, assuming that Maria killed del Campo when she found out he was sleeping with Adrianna Garcia. She denies this, and Sweets decides to talk to Maria and her son, Javier, together.  He gets a quick confession out of the kid: Javier was terrified that del Campo would kill him and/or his mother.  So he followed him to where del Campo was going to burn the car and said he was there to collect the library gun. del Campo handed it over, and Javier shot him. Then apparently got him into the car and set it on fire, then did something with the gun, I guess, since Javier claims not to know where the gun is.  He leads the FBI to someone named Anna, the gun librarian, through a cell phone call.  Booth shows up and catches Anna and some other Estrellas trying to get rid of the evidence.  Everyone wants Sweets back thanks to this case, but he wants to stay at the community center a bit longer, to help kids like Javier.

Ratings
Forensic Mystery - B+. Pretty interesting this week, as burned bones make for difficulties for the Jeffersonian team.

Forensic Solution - C+. The ID was made on a burned skull using facial recognition software. Lame.

Drama - B. Fairly solid episode, actually, with enough action that I mostly forgot about all the inane plot holes.

Next Week: Pelant is back!  And it seems to be some sort of Phantom of the Opera plot ripoff.  Might be interesting, though.  (And I hope to get this posted at a reasonable time, but I'll have a 6-day-old, so we'll see...)

Lightweaver777 said…
I have issues with the copper/lead bullet being intact enough after the fire (which was so intense that the steel parts of the car body were virtually disintegrated) to get any useful ballistic information from. Also, what kind of earring holds up under that kind of heat?
01 October, 2013 23:58