The But in the Joke
Episode Summary 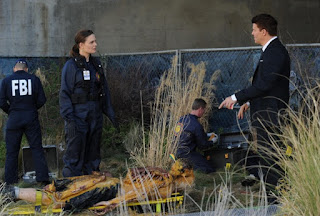 A clandestine artist papering over a billboard trips over his glue bucket and falls to the ground, landing on decomposing human remains and getting stuck to them.  The FBI takes the artist back to the Jeffersonian, where he and the remains are scanned with some mysterious scanner.  The pelvis is large and rugged, which for some reason suggests to Fisher that it was from a Caucasian male.  Hand-waving about upper margin formation on the pubic symphysis means the man was in his early 30s.  Because of a prematurely fused C5 and C6 in his neck, Saroyan thinks that she can find the doctor who performed the surgery and ID the victim.  The artist, meanwhile, is recognized by Angela as Zed, a wannabe Banksy (and recognized by me as Adam Whitman).

Saroyan does track down the doctor who performed the surgery, finds the name of the victim, and confirms the ID - at least, I can hope, since literally all of that happened during the commercial break.  The victim was Morgan Donnelly, who worked at a telemarketing job by day but was a comedian by night.  His manager reported him missing and suggests Booth go talk to Alexa, Morgan's girlfriend who might have been cheating on him.  Brennan insists on driving Booth to Alexa's so that she can schill shamelessly for Toyota.  Alexa and her brother Elliot laugh at the idea of Morgan's death, thinking it was a practical joke.  Elliot knew Morgan, as he recorded all his shows and was chummy with him, so it's completely obvious he did it.

Meanwhile, the Jeffersonian team is still trying to figure out who killed Morgan and how.  There was massive blunt force trauma to the facial bones, including the zygomatics, suggesting Morgan was struck several times.  Saroyan and Hodgins figure based on the state of decomp and the presence of blow flies that Morgan was killed 5 days ago.  At this point, I figure based on the amount of time left in the show that this episode is gonna be a slog.  Hodgins and Fisher clean the bones using both dermestid beetles (to get the flesh off) and Madagascar hissing cockroaches (to get the peanut butter off; oh yeah, the PB was used to de-stick the remains from Zed).

Brennan, Angela, and Fisher attempt to reconstruct the sequence of blunt force trauma.  The first blow was so hard that it broke bones we hadn't even learned were damaged!  The second blow oddly doesn't follow Le Fort fracture lines.  And the third blow smashed in Morgan's face.  Fisher suggests, based on Hodgins' identification of the fragments in Morgan's stomach as ceramic, that Morgan was hit with a vase.  But it ended up being a toilet.  No one mentions what was used on the other end in order to force his head into the toilet - a hand?  The top of the toilet seat?  A blunt object?

Hodgins draws the short straw, apparently, and has to go looking in all the toilets that Morgan possibly frequented in order to find the one he was killed in.  He finds something mysterious (a bone fragment?) in the toilet at Alexa's house.  Elliot admits to having killed Morgan since he was planning to move to New York and leave Elliot, his sometimes joke-writing partner, behind.  Alexa is very, very sad.

Forensic Solution - C-.  And they neglected to mention key information about the victim's injuries until the very end of the episode.  Lazy.

Drama - D+.  Arrggh, I don't care that Angela is sad.  Tonight's plot themes were ridiculous.  There was no urgency in finding the killer, whose identity was telegraphed from very early in the episode.  And any episode with product placement makes me cranky.

Next Week: Uh, something about creepy kid eyes?  I dunno, that teaser made no sense.

Mark said…
I agree with you. I think the storyline is starting to go downhill drastically. But tonight's and next week's episodes are supposed to be part of season 7. They're the last two extra episodes that they didn't show because of Emily's pregnancy and the short season 7. About next week's episode, from my understanding is you're going to view the episode through the murder victim's eyes? That doesn't make sense to me since a murder victim can't see.

I am a forensic anthropology buff (soon to be student) and this has always been my favorite show, but I think if they want to keep their audience then they need to put the show back on track and continue with the original storyline that they were using. It's nice having a little drama in it with Booth and Brennan, but the science is way off base now. I understand they can't explain everything and the technology is what makes the show somewhat entertaining, but you can't have a "forensic science" show and not have proper science facts.
26 November, 2012 23:12

Kristina Killgrove said…
Wait, how are they part of season 7? Both involved Sweets living with B&B. Or do you mean the plots were left over from season 7, and they tacked on some new drama?
27 November, 2012 09:45

Unknown said…
thanks for the Summary. you write it very well but i believe Zed's actor is Jay Paulson not Adam Whitman :)
thanks for your time!
12 July, 2016 07:45