The Method in the Madness

Episode Summary
Two opera-singing sanitation workers notice a decomposing body as it falls out of one of the trash bins they're emptying. At the scene, Brennan notices the large sciatic notch and the dorsal margin of the pubic face, which suggests she's looking at the remains of a female in her early to mid 20s. Hodgins finds eggs from Cochliomyia macellaria (blowflies) with larvae greater than 4mm in length, suggesting the woman has been dead for 36 hours or less. 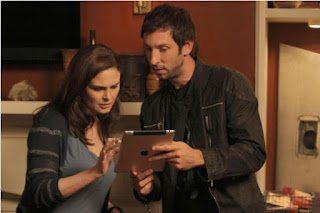 The Jeffersonian team finds loads of sharp trauma on her bones, suggesting the muscles and viscera were ripped from her skeleton.  Numerous deep incisions around glabella, the supraorbital ridges, and the zygomatic arches mean her face was ripped off.  Saroyan notes acute liver hemorrhaging, which means the woman was still alive when she was eviscerated.  Fisher finds numerous deep V-shaped incisions with no serrations in the wounds, suggesting someone strong made the cuts.

From the bits of flesh and hair, Angela is able to reconstruct a face, and she and Hodgins recognize it as Jessica Pearson, who co-owned Them Apples, an artisanal applesauce company.  Booth and Brennan pay the co-owner, Brooke Kaminsky, a visit.  She mentions that she last saw Jessica when she dropped her off at the free clinic and that a creepy butcher named Adam kept giving her meat.  He was just trying to help her out, though, and was threatened by a big, beefy guy.  Fisher gets pig bones from Adam's shop so he can compare tool marks, as Adam won't part with his knives.  He finds that the flesh was removed from the pig and from Jessica in much the same manner, except her throat was slit, possibly by a right-handed assailant.  This rules out Adam, who is left-handed.  Fisher suspects someone is mimicking Jack the Ripper.

Angela and Hodgins reconstruct Jessica's personal effects, including twenty $100 bills.  Sweets questions Dr. Cole Reese (Will Cortlandt!), who was seeing Jessica at the free clinic.  She came in once a month to get an STD test, as she was working part-time as a prostitute.  The microfracturing on Jessica's wrists suggests she was restrained, and the contents of her stomach include Old Tom Gin, which is manufactured by Dr. Cole Reese.  Booth pays Reese a visit and finds him mid-role play, with a prostitute tied to his bed and a knife in his hand.  Reese had been paying Jessica, but she didn't like the handcuffs and had struggled too hard to get out.  As she was screaming, a burly man busted into Reese's apartment and threw him into the closet.

Using street surveillance cameras, Angela gets an image of the 6'6", 250-lb guy who assaulted Reese (Jerry!  Kubiac!).  Willis McCullum, however, was like a father to Jessica, as he helped her through her father's (his best friend's) death, paid for college, and was trying to help her get on her feet.  Brennan and Fisher use Angela's computer to better visualize the pattern of the injuries.  Based on the placement of the sharp trauma and the position of the victim, Brennan finally realizes that a machine made the injuries to Jessica: the ribbon blender used at Them Apples.  Booth and Brennan confront Brooke, who admits to having hit Jessica during an argument about selling the company.  Jessica fell into the ribbon blender, and Brooke couldn't stop it in time.  She disposed of the body in the trash and cleaned up the blender.