The Gunk in the Garage
Episode Summary
As he walks to his car in a parking garage, a man finds an Ultra Gulp of product placement that blows him up.  His head lands, of course, on a No Smoking sign.  The Jeffersonian team gets to the scene and starts bagging all the smithereens of the victim.  There's no VIN or license plate because of the blast, so the identification of the victim is not straightforward. 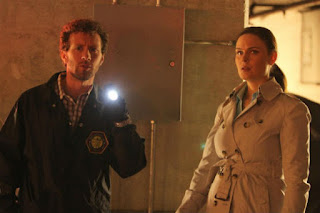 Back at the Jeffersonian lab, Brennan finds that the skull was severed between the atlas and axis vertebrae. The bone density puts the victim in his mid-40s.  Angela creates a facial reconstruction, which gets a hit in the FBI database: Robert Carlson.

Booth has been pulled off the case by Miss Julian, who wants him to do some accounting for his division and offers a promotion and raise, so the investigation is being handled by Sweets and Agent Olivia Sparling.  Sweets and Sparling visit Carlson's wife to tell her that he's dead, but then he shows up.   Booth wonders if Brennan made a mistake, Brennan passes the buck to Angela, and Angela blames Sweets for some reason.  Seems Carlson has an identical twin he doesn't know about.  Sweets suspects that interviewing Carlson about his life will give them pertinent information to figure out who the twin was.

Brennan goes over the victim's skeleton and sees old, healed fractures to the left 6th and 7th ribs and the first metacarpals.  Saroyan interprets these injuries as the result of a bookie or loan shark.  Hodgins finds a very special cockroach egg on the detonator wire, and Angela puts some information together to find the place the bomb equipment came from.  She also inputs Sweets' data on Carlson into a super magical computer database that includes the pictures, birthdays, and hobbies of every person in the US, and finds that the victim was Jerry Langella.  Langella's wife has an alibi, so they look for other suspects.

Angela continues to solve the case single-handedly, tracking Langella through the hotel security tapes and realizing that both Carlson and Langella were at the hotel at the same time.  Both were there for a Self Actualization Synergy meeting, even though neither man knew the other.  Sweets and Sparling talk to Carlson, who was planning to give up his life savings to live in Colorado with the Synergy cult.  They then question Carlson's wife, as she took out $20,000 and googled for hitmen, trying to off her husband before he gave away all their money.  The hitman made a mistake and offed Langella accidentally.  She also admits that the hitman is at that moment attempting to kill Carlson.

Based on a bit of hair embedded in tissue in the garage, Brennan and team deduce that the murderer was there in the garage when the blast went off.  The location of the goop suggests he was average height, and the hair is brown.  Booth gives up the desk assignment and races to the scene with Sparling and Sweets.  Brennan suggests they look for someone who is off balance due to an injury to the malleus and dislocation of the stapes -- a middle ear injury, which would leave the murderer off-balance.  She realizes the murderer is Steve Kaneely, the owner of the explosives warehouse who falsely claimed a break-in happened a few weeks ago.  He tries to give the bomb to Carlson, but Sweets grabs it and Booth and Sparling shoot Kaneely... and Sweets.  Oopsie.  This makes Sweets fall for Sparling, in spite of the fact he's still with the ever-offscreen Daisy.