Skulls in the 21st Century - UM's Ford Collection Is Digitized

The University of Michigan's Museum of Anthropology has digitized their cranial collection, which consists of (I think) around 160 skeletons.  I couldn't find much information about the Ford Collection of skulls, but I assume they are not Native American and are possibly more long the lines of the Morton Collection at Penn or the Terry Collection at the Smithsonian, based on this report:

What makes the Ford Collection news is that it has been fully digitized: 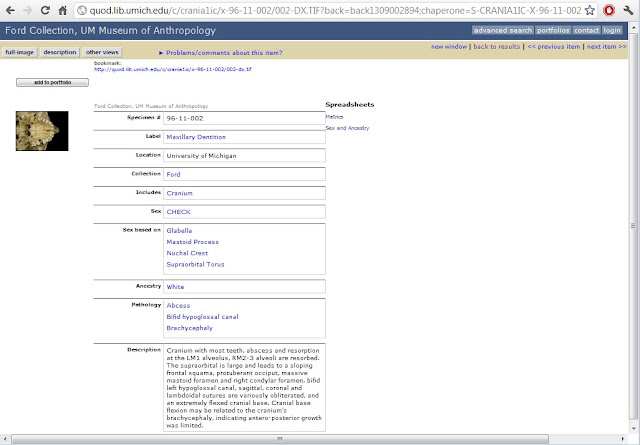 Click on the picture, and you get taken to a screen where you can zoom in and out.  This is great, but the picture that I chose didn't look very good over about 816x612.  I could zoom in, sure, but the image was fuzzy and had no better resolution past that point.  Perhaps there are images within the gallery that do go up to 3264x2448? 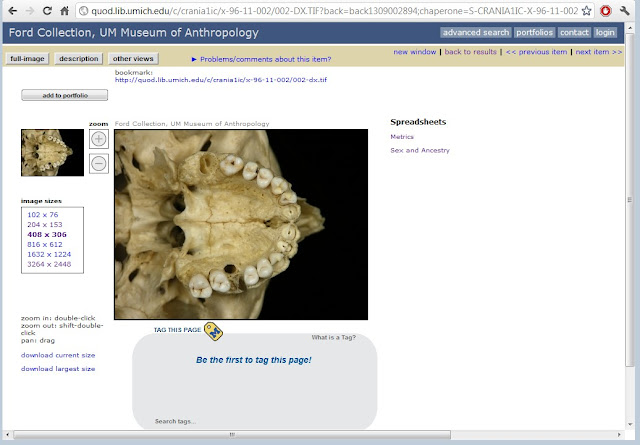 Not only are there pictures, there are full measurements for each and every skull.  You can simply click and download an Excel file or send it to Google docs, which is what I did here: 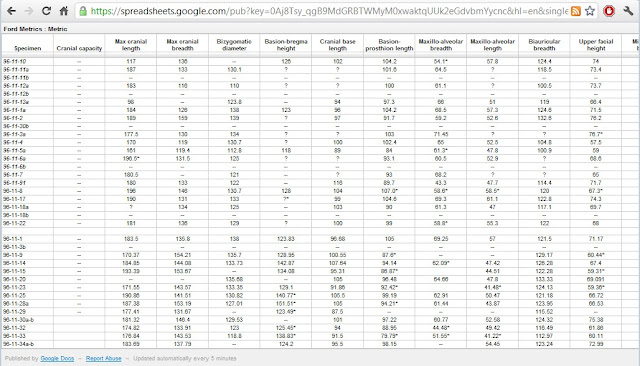 Last but certainly not least, there are screens for trauma and pathology.  You can even search the pathologies, which are alphabetized, to find all of the examples of, say, abscesses: 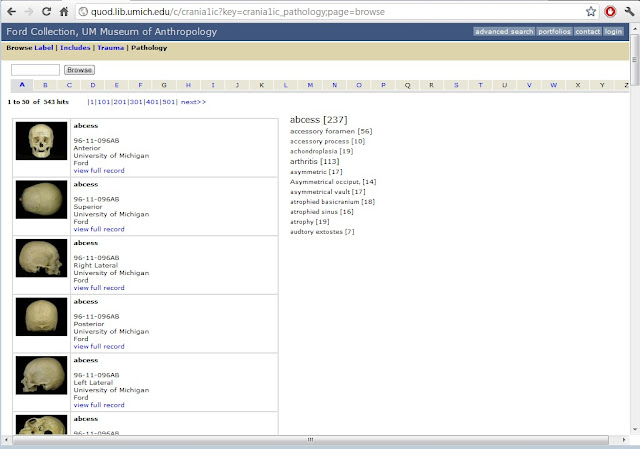 As far as I can tell, the collection is just of skulls, which means no postcranial data.  It's unfortunate, but it's also the legacy of skull collecting in the U.S.  (Aside: Do read The Skull Collectors if you're interested in that kind of thing.)  Not all of the images are high-quality.  And when I clicked on "metrics" and "sex and ancestry," I got the same spreadsheet.  Perhaps only some skulls have two different spreadsheets, and the ones I was playing with didn't?  Curious.  I might email and ask.
In all, though, this resource is going to be invaluable to me as I prepare to teach Human Osteology and Health & Disease in Ancient Populations this fall.  When I took Osteo for the first time way back in 1998, there weren't digital archives.  I had to scrounge through UVa's library until I finally found a book on Egyptian crania that listed measurements at the end - and I had to type each and every number in so that I could do some statistics and look at population affinities.  Digital archives present their own challenges, but I'm excited to start thinking about how to incorporate this site into a project or two.
(Hat tip to my esteemed colleague, Laura Banducci, for passing along the press release to me.)

Zachary Cofran said…
Hi Kristina,
Glad you like this resource! Some fellow graduate students and I have been working for the past few years to put this together. We've got some work to do to in terms of organization and collection/contact information. But I'm really really glad that it's known to the world outside our lab, and will be useful at that!