Skip to main content
Posted by Kristina Killgrove May 24, 2011

Severed Head (not that kind) of the Saint of Genital Diseases

My news feed this morning brought me the report of a 19th century painting whose subject was revealed based on a giant testicular tumor, and now I get the BBC's report that the "Severed head of patron saint of genital disease [is] on sale." (Image below via BBC.) 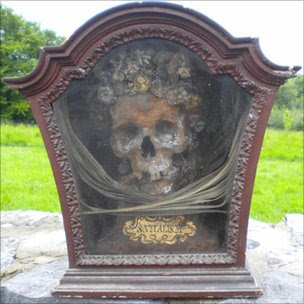 In the 14th century, Vitalis was reportedly quite a promiscuous young man. He eventually expiated his sins, became a monk, and was beatified as Saint Vitalis of Assisi, patron saint of genital diseases. His head will be auctioned on May 29. It's currently valued at between $1,100 and $1,700. Y'all want to give me some money to buy this relic, right?