Skip to main content
Posted by Kristina Killgrove May 10, 2011 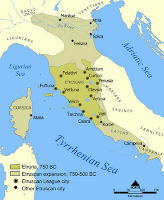 The Etruscans were a civilization in the Tuscany area of Italy, known from at least 700 BC and distinguished by their rather unique language and pre-Roman material culture. By the first century AD, though, nearly all evidence of the Etruscan language had been wiped out and replaced by Latin as the lingua franca of the vast Roman Empire. Because the Etruscan language was a linguistic isolate, classical linguists do not know the whole language. They have, however, been able to translate almost all instances of it (evidence of which is often found in tombs), thanks in large part to bilingual documents like the Pyrgi tablets and the very cool Piacenza liver, a tool used by priests in haruspicy (divination based on animals' entrails):

Although my chronological specialty in ancient Italy is the Roman Empire (1st-4th c AD), I am, like every other Roman archaeologist, still fascinated by the rather mysterious Etruscans and their contributions to Roman culture and the Latin language. This week's early view of Archaeometry brought me yet another interesting article: "Gambling with Etruscan dice: a tale of numbers and letters" (Artioli et al., in press). In this short paper, the authors present an elegant solution to the longstanding question of Etruscan numerals, namely whether the Etruscan words huth and sa represent 4 and 6 or 6 and 4, respectively. The wikipedia article on Etruscan numerals (which I assume is based on the work of Giuliano and Larissa Bonfante, although no attribution is given), notes that most Etruscologists agree that huth is 4 and sa is 6.
Artioli and colleagues delve into this linguistic mystery by investigating 93 Etruscan dice: 91 with dots/pips and the only 2 that have been found with words written on them. All of these are 6-sided dice, meaning - for you math geeks - there are 15 possible enantiomorphic permutations (combinations of two numbers on opposite sides of the die, or 6!/48). The authors, however, found only 2 permutations in the 91 dice they examined. The first permutation has the numbers in ordinal fashion: 1-2, 3-4, 5-6. The second permutation, which still exists today, has the numbers add to seven: 1-6, 2-5, 3-4. A seriation of the dice revealed that prior to the 5th century BC, the dice all had the ordinal permutation, and after the 3rd century BC, the dice all had the add-to-seven permutation (with add-to-seven waxing and ordinal waning in the intervening centuries). This fact is interesting in and of itself, but what the authors further realized was that in both permutations, 3 always exists opposite to 4.

Photo composite of the 6 faces of the die Luynes 816 (Artioli et al., figure 8)
Enter the wordy dice (above). In these, thu is opposite huth, zal is opposite mach, and ci is opposite sa. Since we know that thu is 1, zal is 2, ci is 3, and mach is 5, this means that the permutation is the add-to-seven variety. Regardless of the permutation used, the fact that ci is opposite sa means that sa is 4. By process of elimination, huth is then 6. This attribution is contrary to previous assumptions about the numbers. Elegant, right?
I don't have the Etruscan linguistics or archaeology background to fully critique this article, but based on the information presented and what I do know about the culture, I think the wikipedia article on Etruscan numbers deserves a little update. I'll be interested to see how widely this article gets circulated and incorporated into Etruscan language studies, first because Archaeometry seems an odd place to publish this revelation and second because I can't tell if this is going to be controversial or not.

I had never heard of the archaeometry journal, but I guess that is not unusual since I'm not an archaeologist.
10 May, 2011 17:36