Skip to main content
Posted by Kristina Killgrove May 19, 2011

What's tall, angry, and walks on two legs? Only hominin males, apparently.
Today's news brought a PLoS article claiming a new theory for why we became bipedal: to fight better. [ScienceDaily article] A University of Utah biology professor, David Carrier, has claimed that men hit harder when standing upright than on all fours, as they can hit downward rather than upward. This, he says, gives men who stand on two legs an advantage and could explain both the evolution of bipedalism and the reason that women prefer tall men.

"The results of this study are consistent with the hypothesis that our ancestors adopted bipedal posture so that males would be better at beating and killing each other when competing for females," says David Carrier, a biology professor who conducted the study.
"It also provides a functional explanation for why women find tall men attractive," Carrier adds. "Early in human evolution, an enhanced capacity to strike downward on an opponent may have given tall males a greater capacity to compete for mates and to defend their resources and offspring. If this were true, females who chose to mate with tall males would have had greater fitness for survival."

A cursory read of the PLoS article shows that Carrier seems to have used neutral language while talking about the "subjects" and "mammals." And yet in the ScienceDaily report, Carrier doesn't pull any punches and specifically relates his findings to males, through the proxy of male-male competition among primates for mates and therefore sexual selection. 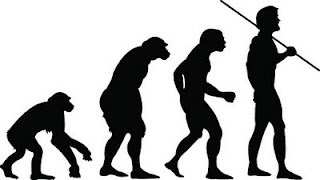 I'm not a palaeoanthropologist, so this isn't my particular specialty, but when I teach about theories for bipedal development, I am always cautious in reporting those that are sex-specific. For example, Owen Lovejoy's "male provisioning" hypothesis says that males evolved bipedal tendencies to bring food back (in their arms) to their mates, and this also led to pair-bonding (or "monogamy"). I guess the anatomical changes associated with bipedalism would then be passed on through a non-bipedal mother to her children? Perhaps it's my failure to fully understand the tenets of sexual selection, but the assumption that females were just sitting around waiting for males to bring them food and not evolving is sexist and ridiculous. (Not to mention, hominins likely weren't monogamous.)
Similarly, this new study assumes that males were fighting for resources (food, mates, etc.) but that females were not. They were therefore reliant on males to protect them (just as Lovejoy's females were reliant on males to feed them). And yet evidence from primates shows that pair-bonded gibbons defend their territory - male and female, young and old.
Sure, I will buy that it's easier to punch someone in the face if you're standing on two legs rather than on four. That's kind of a no-brainer. But positing that males were the active evolvers and females were the passive recipients of evolution is androcentric at best. What's worse is that this kind of research is generally taken by the mass media and pseudo-scientists as proof of long-held assumptions about human nature and gender relations.


As I've written about before, anthropologists are calling into question our ideas about violence and fighting in the past, especially the role of women in those altercations. Palaeoanthropologists need to question this new theory too (as it's a scientific duty to do so), specifically tackling where the females are and what evolutionary pressures would have caused them to evolve bipedal tendencies. A theory that only makes sense for one sex is not robust, in my mind.
Thanks to a suggestion by John Hawks, my summer reading list just grew to include "Women in Human Evolution" by Lori Hager. I'm looking forward to reading up on the gender bias in human evolution (and wondering if there's anything I can do through my teaching to correct it, at least in the minds of my undergraduates). The book was published in 1997, though, so I'm hoping that someone will write an update to cover the changes in biological anthropology that have happened in the last 15 years.
Blogging about tall, pugilistic men who helped me evolve has made me hungry. Maybe one of them will provision me with something tasty for lunch.

Keith said…
Nice summary! Besides the sex bias, there are some other problems with fighting as a strong factor in selection towards bipedalism and standing height. First, a chimp will tear apart a human in a fight. Second, fights frequently end up on the ground, as fans of MMA know. Height would be a disadvantage when rolling around on the ground because longer limbs would be easier to grab and hold. It would be better to be shorter, with shorter limbs, in this situation.

I do believe that the ability to fight was an added bonus to bipedalism, but I'm thinking of more weapon-based fighting with hands grasping tools as weapons. Fist fighting would be relatively ineffective and probably wouldn't drive the evolution of any traits.
19 May, 2011 15:42

Michelle Ziegler said…
I would think that having free arms would be more important for taking care of our weak, relatively under developed infants while being on the move. Most animals with infants as helpless as ours have to stay in dens/nests etc for an extended period until the kids develop and gain strength.
19 May, 2011 23:48