BBC News is reporting on the skeleton of a 16- to 20-year-old female found in Kent (England), in a grave that has been dated based on random pottery fragments to about 50 AD. According to Paul Wilkinson, the director of the excavation (which seems to be salvage in nature rather than a large-scale dig), the trauma to the back of the young woman's head suggests she was stabbed while kneeling down. The skeleton was found in a shallow grave pit oriented north-south; she was buried face-down, with one arm underneath her and a foot seemingly outside of the dug pit (pic below via BBC). 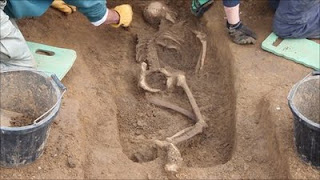 First things first. A female in her late teens in Roman times was probably not a "girl." Depending on health, she may have gone through puberty already (Amundsen & Diers 1969), and depending on social status and ethnicity, she may have been married (Hopkins 1965). The head trauma is quite interesting (or would be if there were an actual picture of it), but there is no indication from the BBC report how the archaeologist concluded it was a sword wound, much less how he could tell it had been inflicted by a Roman sword. From the reported data, it does sound like she had been hastily buried, but I don't buy that grave orientation can tell you whether she was local or not.
Was a "girl murdered by Roman soldiers," as the headline reads? The verb seems reasonable, but we can question the characterization of both the victim and the murderer. Maybe she was killed by a jealous lover and hastily buried? Seems equally as likely as having been killed by a Roman soldier, at least based on the evidence presented.
Wilkinson is further quoted as saying that "Now, for the first time, we have an indication of how the Roman armies treated people, and that large numbers of the local populations were killed. It shows how all invading armies act the same throughout history. One can only imagine what trauma this poor girl had to suffer before she was killed." Yup - this one skeleton shows that, in the long history of human warfare, all soldiers act the same. And this one skeleton unequivocally tells us that Roman soldiers brutalized the locals.
I'll leave this rather ridiculously aggrandizing story with a note of caution to archaeologists approached by the media, courtesy of Julien Riel-Salvatore, who just today wrote an excellent post on this topic in light of the gay caveman debacle: "It may be time for anthropologists and archaeologists to get some actual formal training in PR or media relations as part of their education."
UPDATE (5/3/11) - BBC now has a video, with a cool pan over the skeleton and a bit of talk-and-point with Paul Wilkinson. Wilkinson found the burial, suggested the woman was killed by Romans, and apparently also suggested that this is also evidence of the first Roman fort in Britain! Fortunately, BBC also talks to archaeologist Chris Sparey-Green, who craps all over Wilkinson's assertions (well, in a demure, British way). Watch the video here.

David said…
I have to say I have been reading your blogs recently and I just saw this one, and I really love your blogs.
I enjoy archeology a lot though do not know a whole lot about it, and I always enjoy reading your blogs since they bring such great skepticism to the subjects that most people who know nothing about it would over look.
01 May, 2011 22:37