National Geographic reports on one of their TV programs (this seems to be increasingly common for them to do, which I find a bit odd) about the possible discovery of a pair of saints, Chrysanthus and Daria. The partial skeletons (300 bones) - one male in his late teens, one female in her 20s - were found in a cathedral vault in Reggio Emilia. Both skeletons show few indications of physical stress, and both have high levels of lead. Carbon dating returned a range of 80-340 AD.
Daria was apparently a Vestal Virgin, then converted to Christianity and married Chrysanthus, although both were celibate. Chrysanthus was the son of a rich senator. They were sentenced to prison (him) and prostitution (her) for daring to adopt Christianity, but miracles intervened for both, so they were sentenced to death by being buried alive in Rome. Legend has it their bodies were moved to Reggio Emilia hundreds of years later.
I doubt these bones represent these saints, mostly because of the leaps of faith we'd have to take in the taphonomy. When we see physical (biological) relics of saints in Rome, it's usually a few fingers, not a whole head or an entire skeleton. Archaeologists reportedly recovered 300 bones, which is nearly 75% of each one of them. Daria and Chrysanthus were moved, though, around 1000 AD and taken hundreds of miles north of Rome. Then reinterred. The likelihood that skeletons would be 75% complete after two burials, a long journey, and 2,000 years is really quite slim. And these bones (seen below, from the NatGeo article) are fantastically well preserved (and, honestly, the ones that supposedly represent Chrysanthus look female and quite gracile to me): 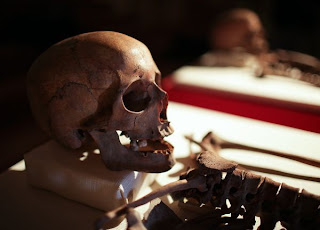 There's no differential given in the article: did they rule out all other male-female dyads from the cathedral records? DNA analysis of relatives? How did they tell they were - as the NatGeo title claims - buried alive? Thankfully, early in the piece, a palaeopathologist says that there's no way to know if these skeletons represent these historical people, and an anthropologist reiterates that "we can't be certain" the skeletons are those of Daria and Chrysanthus.
One final thing that's irritating me before I drop this:

By analyzing trace elements in the bones, the team also uncovered signs of lead poisoning—a uniquely aristocratic ailment in ancient Rome. The toxic metal was present in the city's plumbing system, which reached only the homes of the wealthy.

First, Rome's plumbing system did reach the houses of the wealthy. They could pay for a tap to be installed in their houses and get aqueduct water. But the people living along the aqueduct's route, particularly in the suburbs, also tapped into the water system - in a way analogous to tapping into a cable TV signal in the modern day. Taylor (2000, p. 39) estimates that unauthorized water delivery in the suburbs totaled around 89 million gallons of water a day, nearly the same amount as the estimated 100 million gallons of water that was being piped into the city of Rome. So having access to aqueduct water does not equal high status in any way.
Second, the idea that the Romans got sick from lead pipes has been thoroughly discredited (good list of sources here), mainly by showing that: a) the water flowed through the pipes and did not ever stop, meaning there was no opportunity for the lead to leech into the water; and b) the calcium concretions within the pipes from the water would have buffered it against direct contact with lead for much of the span of the plumbing. More germane to the idea that elite Romans had lead poisoning is information from ancient sources like Pliny's Historia Naturalis and Columella's de re Rustica, which note that people used lead utensils and cookware and sweetened their wine with powdered lead.
I do hope that the paragraph about lead in the skeletons was written by the NatGeo journalist and did not come from the anthropologists - lead could easily have seeped into the skeletons from groundwater, changing the original lead content of the bone (a phenomenon known as diagenesis), as we know that there were high levels of anthropogenic lead in Rome, particularly in areas of the suburbs where lead was being smelted. It annoys me when people assume the Romans were poisoned by their plumbing. Yes, the very word "plumbing" comes from the same root as the Latin for lead - plumbum (Pb) - but there is no evidence that lead pipes caused widespread lead poisoning.
The NatGeo article (and, I hope, the TV program) does admit the limitations of forensic archaeology - that is, of trying to associate a skeleton with a particular person - but also claims in the title that the study suggests these people were buried alive. I am not in the least convinced that these skeletons represent Chrysanthus and Daria, but I'm glad to see that many of the anthropologists aren't either.
Citations:
Taylor, R. 2000. Public needs and private pleasures: water distribution, the Tiber River, and the urban development of ancient Rome. Rome: L'Erma di Bretschneider.

Stefanie said…
Another great post! National Geographic is always misinforming the general public about the ancient world and I can only imagine it must be the same for other periods of history. Sigh.
17 April, 2011 21:51

Anonymous said…
If the articles are just cold facts, they wont sell. Hence the situation of add it in, and personalize it.
19 April, 2011 19:15

Ale (Italy) said…
the press is the press and often tells the facts in a distorted way. I know this study of saints and Shrysanthus Daria and I can confirm that many of the facts written by the world press are incorrect. Anthropologists, as in this case, could never be said that the two skeletons belonged exactly to the two saints, even though all the data emerging from the study are in accordance with tradition, can't never be sure of the authenticity of the relics
21 April, 2011 04:14