Berries are pink, skies are blue...

Jezebel has a nicely sardonic post about the Daily Mail's coverage of a study by Chinese researchers published in the journal Personality and Individual Differences called, "Could sex differences in color preference and its personality correlates fit into social theories? Let Chinese university students tell you." 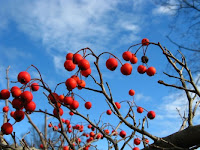 The researchers interviewed 359 college students for a few minutes on their color preferences and used those answers to support their a priori conclusion that, because of an ancestral pattern of hunting and foraging, women have specialized brains for identifying ripe fruit and men key into blue because of the correlation between clear skies and good hunting. The abstract, in full (the article is behind a pay wall or library access):

The unclear picture of the sex difference in color preference might result from personality variations. We invited 359 Chinese university students (166 men and 193 women) to undergo a color preference test and the Zuckerman-Kuhlman Personality Questionnaire (ZKPQ), a five-factor model test. Depressive trends were measured by the Plutchik-van Praag Depression Inventory (PVP). There was no significant difference between men and women regarding either ZKPQ or PVP scale scores. However, men preferred blue and green significantly more, and their preference order of yellow was negatively correlated with ZKPQ Sociability. Women preferred purple, pink and white significantly more, their preference order of gray was positively correlated with Neuroticism-Anxiety, and the order of orange negatively with Aggression-Hostility. Our results suggest that, partly from a biological layout, men as hunters and women as gatherers prefer some different colors on the one hand, but from a social structural layout, they might try to adjust some personality traits by preferring other colors on the other, in order to attain a sex-equality but polychromatic world.

Jezebel has a nice take-down of the conclusions, but I want to offer two additional critiques: that a sample of 359 people is nowhere near large enough to draw conclusions about biological bases to color preference, and that a sample of college students is nowhere near representative of people in general and is a very specific cross-section of the population: namely, the young, economically well-off, educated portion. The use of college students as a research population has a long history, but the practice has been critiqued for decades (Gordon, Slade & Schmitt 1986, 1987; Peterson 2001). College students are an incredibly easy population to survey, but that doesn't mean they're the best population to survey.
Can a survey of a few hundred young adults in a contemporary, state-level society give us an insight into a possible biological basis for color preference? I'm gonna go out on a limb and say no, it cannot. Not unless you've convinced me that those color preferences weren't enculturated into those college students over the last two decades of their lives through parents, media, and strangers keen on reinforcing the notion that blue is for boys and pink is for girls, and keen on policing parents and children who don't conform. It's like that old nursery rhyme...
Berries are pink,
Skies are blue,
Perhaps there's a biological basis for color preference
But it's swamped by cultural ideas foisted on you.
References: