This has been floating around the classical blogosphere this morning: Omnes Viae, the ancient world's equivalent of Google maps' "get directions" feature. The routes are based on the Peutinger Table, which has been studied in great depth by the esteemed Richard Talbert in the history department here at UNC. The site is in English, German, Dutch, and Greek (no Italian?) and is super fun to play with.
Let's say that Lars Porsena wanted to get from his native Clusium to wage war on Rome but wasn't sure exactly how to get there. Just type in Clvsio and Roma, and voila! - his route would look like this: 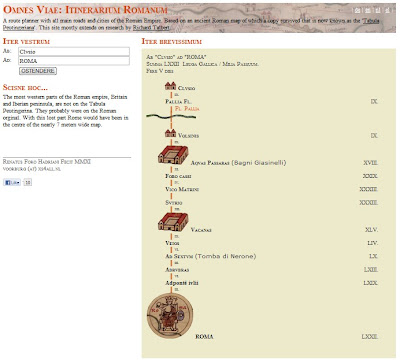 As someone who works on physical mobility, I've been geeking out on this site for the past half hour. My research hasn't taken me specifically into routes of movement yet, but I plan to explore that topic (and Omnes Viae) more in the future.
In the meantime, is there an intrepid game designer out there who wants to make me an Oregon Trail-like computer program out of this? "Gaius has died of malaria. Do you want to cremate or inhume him?" "You've come to the Tiber River. Do you want to ford it, pay a ferryman to take you across, or make a raft out of the corpses and detritus littered about?" Seriously, I'd play this. Endlessly.

Update (7/11/11) - René Voorburg emailed me to say that there is now Google maps integration for Omnes Viae.  It's very neat to see the Peutinger map presented the way we're more familiar with: cardinal directions, areas of interest along the route, etc.

Kristina Killgrove said…
I have an overhaul planned, but not until after the semester ends. Too much to do, too many gay cavemen to blog about, not enough time to revamp the ol' blog.
07 April, 2011 12:44