My last name is quite unique: this means I often give a different name when making reservations but also means that someone can misspell my name pretty badly and still find me in a web search. There are only a handful of us in the world, and I even have a Big Book o' Killgroves made a couple decades ago by a distant relative interested in genealogy. Most of the other Killgroves are not very directly related to me, as my dad's brother never had children and my dad's sisters did not pass along the name to their kids. I've always been curious about our last name (which, in spite of having to spell it all the time, I love) and wish I had more time to dig into genealogy.

With the internet, it's a lot easier these days to trace the branches of the family; I even have a Google alert for "Killgrove," but it almost always returns news about me, as I seem to be the most internet-connected person with this surname. I discovered a new resource today: the World Names Public Profiler. It shows you the frequency of a surname around the world. Well, in some of the world; their coverage isn't great. It has the US and Canada, as well as most of Europe and Australia, but coverage of South America, Asia, and Africa is almost non-existent.

I put in my last name and got this map: 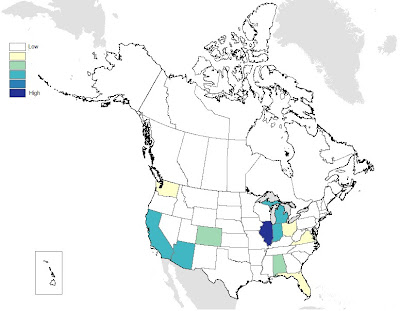 With such a unique name, I can actually pinpoint family members. Virginia represents my mother, who actually recently changed her last name when she remarried. Arizona is my brother. California includes my grandfather, who passed away last year, but also a bunch of people in other counties (one of whom is probably his cousin, the mathematician Raymond Killgrove). Washington state is probably my deceased uncle's wife. I'm not sure why I'm not on this map - I've lived in North Carolina for more than a decade, except for a stint in upstate New York. I don't know the family clustered in the midwest (my branch of the Killgroves are kind of loners), but my dad was born in Illinois, so perhaps his second cousins are there.

Based on the Public Profiler, the surname Killgrove doesn't exist anywhere other than the US. It was likely a newly-created Ellis Island name, and my best guess is that it's a form of Killigrew, a popular surname in Ireland. We really only have records of the Killgroves back to the Civil War era; before that, everything gets murky. But one bit of family lore has us coming to the US from Ireland; another bit blames our dark hair, dark complexions, and light eyes on a so-called "black Irish" heritage. Regardless of the origin of the surname, though, we're typical American mutts - we have plenty of English, Scandinavian, Russian, and Native American genes to go along with the Irish.

Lara Newell said…
This was a cool link! I put mine in and it showed me some results I didn't quite expect. I got US, Canada and England (which I knew was going to come up since Thomas Frame came over from England in the 1660s) but the two most popular were New Zealand and Australia. So now I'm wondering if the Frames were criminals and were sent there as part of the penal colony :) Obviously I have no Aborigine blood in me.
10 February, 2011 19:37