An African in Avon? 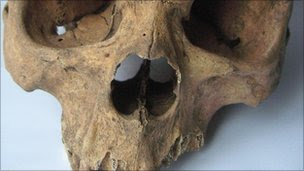 The BBC just published a short article reporting on the discovery of the skeleton of an African man who died in what is now Stratford-on-Avon during the Roman period (4th century AD - and a slightly different report here). It was discovered in 2009, and it seems that archaeologists "now believe the man may have been a Roman soldier who chose to retire in Stratford after serving in an African unit." This is really exciting news, adding to the finding of people of possible African and Roman descent in England, whose skeletons are beginning to come to light through the use of isotope and DNA analysis. (Image at right from the BBC; I assume it's the actual skeleton.)

The problem with the BBC article (and with much media coverage of bioarchaeological remains) is that it infuriatingly gives no details at all on how it was determined that this skeleton represents that of an African man: isotopes, DNA, morphology? (The article also incorrectly refers to Malin Holst as "he." Hope this is changed soon.) Even worse, it publishes inferences without any sort of real data to back them up. Osteological examination "revealed the man was heavily built and used to carrying heavy loads. He had suffered arthritis in one of his shoulders, his hips and lower back." That's pretty interesting, but if this was an older man (as the article suggests), it's not terribly unusual to see osteoarthritis in the skeleton. By "heavy loads" I'm guessing the vertebrae had Schmorl's nodes, which are fairly frequently found in skeletons. Archaeologist Stuart Palmer is quoted as saying, "He could have been a merchant, although, based on the evidence of the skeletal pathology it is probably more likely that he was a slave or an army veteran who retired to Stratford." Granted, slave, soldier, and merchant were the main classifications of men who moved around the Roman Empire. But there were certainly free civilians, students, and others (like women and children) who circulated in this large geographic space. Additionally, slaves could (and were often) freed, so the ideas of social class and free/slave are quite mutable in the Roman Empire. Adding up the pathologies and coming to a conclusion of slave or soldier is not much more than a guess. Plus, without comparison with a larger population, we can't really say how unique this skeleton is (i.e., whether or not he was "heavily built," since that's sex- and population-dependent).

The main problem with media reports of skeletal finds is that the media wants to present the individual in the vein of forensic anthropology - as an individual - rather than in the vein of bioarchaeology - as a member of a population. While this individualizing of the dead grabs the public's interest, it leaves researchers like me wondering what the comparative population is. Individuals make sense only in relation to the population, and we can only understand populations by studying individuals. When the media reports on individual skeletons and takes them out of this feedback loop (and when archaeologists take a wild stab at what makes the skeleton unique without first putting them in the context of the population), the general public gets a one-sided view of what bioarchaeologists do and what life was like in the past.

I hope a bit more information comes out about this skeleton soon, as I'm very interested to read more in-depth about it. There is a lot of excellent research coming from my British colleagues, particularly related to physical mobility and circulation in antiquity (some of which I've blogged about here, here, and here), so I continue to follow their discoveries as closely as possible.

UPDATE - When I read Rosemary Joyce's reaction to this news, I noticed in the Archaeology Daily News report that Stuart Palmer is quoted as having said, "Currently there is no evidence to suggest whether he was born here, Africa or anywhere else." What the hell? How can someone submit a press release that says this man was from Africa? It's not that the media didn't report on the way his African ancestry was discovered, it's that someone just guessed that he was African, based on... I dunno, his "heavy build"? This is all rather ridiculous, and I hope there is a good explanation for how "African man in Avon!" got out.

UPDATE 1/26 - The (original?) Sunday Mercury story has the "no evidence" line, so it appears the BBC wantonly disregarded Palmer's note that they don't actually know where the individual was born. Silly me for assuming that the BBC would have the full story. Presumably, the BBC did this to make better copy. Now, of course, there's a news echo chamber going on, with subsequent reports flashing fancy graphics of a Roman soldier and a map of the Empire (Daily Mail).

UPDATE 2/8 - The Stratford Observer just picked up on the article, which it seems to have reprinted from in toto from another site (not the BBC, as it contains the "no evidence" line).

Judith Weingarten said…
The new History Carnival is up and this post is on it: Bravo Carnivalesque 71