The Daily Mail (yes, I know, not the most stalwart of British publications) posted an article today headlined: "Workmen discover body of 'huge' gladiator who was 'stabbed 6 times and thrown out with the rubbish." That caught my attention. Reading further, the skeleton was found in York, an area with a history of odd Romano-British burials, as I've blogged about before. Curious to see how tall this person was, I read beneath the caption of the first picture that he stood around 5'10" and that the average for "people" at that time was 5'3". The Romano-British may have been different from my Romans, but Roman men stood on average 5'6". Still, 5'10" is only one standard deviation from my average Roman male, and perhaps two if the Romano-British mean is correct. What I'm saying is that 5'10" was not "huge." And I'm saying that their "average" figure may not have separated people by sex.

Requisite shot of Russell Crowe, and we get to a bit of explanation of the analysis of the skeleton. Some osteologists apparently love occupational markers (so much so that the rest of us are forced to use the term musculoskeletal stress marker - which, yes, has the acronym MSM - to differentiate real osteological analysis from the stuff you see on TV), and "physical evidence reveals he was a swordsman." I'm guessing it's because of the deltoid tuberosity (which isn't actually all that large, and happens to be on the left)? The article curiously does not mention that only the upper half of the skeleton was found; I'm reading between the lines that the lack of a pelvis forced them to use "degeneration of his joints and wear to his teeth" to estimate age (at 35-45). And yet there is no mention of how they figured out sex - did they use size and robusticity (which are terrible metrics)? The attributes of the skull (but the eye orbits are sharp and rather female-looking)? Further, the researchers are quoted as saying, "you can tell height by measuring a long bone like a thigh or shin bone." These bones are not present, so it's unclear what they based their stature estimate on - the broken humeri? (I'd probably go with the broken left humerus if I were forced to estimate stature; but it's bad practice to estimate stature from fragmentary or broken remains.)

All of these issues were making me seriously question where the Daily Mail author got the osteological information from, as well as the professionalism of Andrew Morrison, the curator of archaeology at the Yorkshire Museum who posed with the skeleton. And then I saw the last picture. It is the most stunning example of shoddy osteology I have ever seen; the laying-out of the remains was clearly done by someone without even a rudimentary knowledge of the human skeleton. The untouched photo can be found here, and below is my GIMP-ed up version. See if you can figure out what's wrong before scrolling down to the legend... 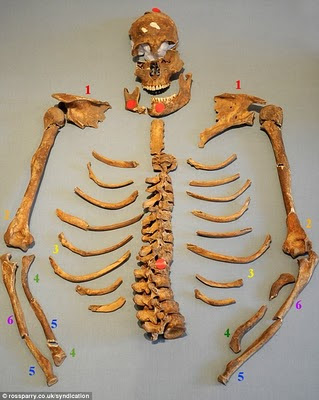 1. The scapulae are switched - left and right are in the wrong places. (The spine and acromion process of the scapula are dorsal, towards the back, not pointed into the rib cage.)

2. The humeri are also switched - our elbows don't bend that way. (The olecranon fossa of the humerus receives the olecranon process of the ulna; this connection means that we can extend our arm at the elbow and lock it.)

4. These are pieces of the clavicles or collarbones, which definitely do not belong in the lower arm. (Clavicles have a distinctive S-shape that reinforces the shoulder girdle and disperses force on the shoulder.)

5. These are pieces of the radii, the lateral (towards the thumb) bone of the lower arm. In the photograph, the proximal radii (the parts that articulate with the humerus) are turned upside down and used to represent the distal portion of the ulnae. It can be possible to confuse these bones if they are just shafts, but these radii include clear heads and radial tuberosities.

6. The ulnae are reversed, left for right. (The radial notch of the ulna points towards the radius, and therefore points laterally. In the photo, the radial notches are pointed medially, meaning they were switched.)

If you all can find more issues with this photograph, feel free to post in the comments. I can't look at it anymore; my brain hurts. Yorkshire has some amazing bioarchaeologists - why wasn't one of them consulted before this photo was taken? Maybe I'll contact Mr. Morrison, just to make sure that the public display of the skeleton (as noted in the article) is not this egregiously wrong.

Update (12/11/10) - In my original post, I was a bit careless in how I described York Osteoarchaeology. It was not my intention to impugn their reputation based on my reading between the lines of a Daily Mail piece. As noted in the comments, what I should have said is that it is unfortunate that this kind of sensationalism by the media can reflect poorly on trained osteologists. Even people writing in the comments section of the Daily Mail article have picked up on how much the author of the piece has bent, stretched, and outright fabricated the "facts" about the skeleton - presumably to gain readers. The director of York Osteoarchaeology, Malin Holst, was cited in the article but responded in the comments below that she was never directly contacted for this piece. I have definitely learned something about how the Daily Mail operates and that their journalism cannot at all be trusted. I still hold, however, that the Yorkshire Museum should better vet its press releases and photographs in order to protect their reputation. I always love to read about Roman(o-British) skeletons and would prefer to do it devoid of sensationalism and without having to read between the lines of an article in a popular rag. Links, papers, bibliography, etc. are therefore always welcome!

Update 2 (12/11/10) - My colleague Nivien Speith at Uni Bradford pointed me at the BBC coverage of the find, which makes a lot more sense than the Daily Mail article and doesn't include any ridiculously error-filled photographs.

Anonymous said…
Dear Kristina,
It seems you have not realised that this was the Daily Mail and not an osteological report. You would find - if you had the courtesy to ask - that I use standard methods to determine age, sex, stature and pathology.The Daily Mail did not interview me and just went by what the museum press officer said. I agree that the skeleton has not been laid out correctly, and this was not done by myself or any of my staff.Before you criticise me or my company on the basis of an article in the Daily Mail, it might be worth making some further enquiries in the future. Malin Holst
11 December, 2010 11:15

Kristina Killgrove said…
Hi, Malin. Thank you for your comments on my post. I should revise it, as I honestly did not mean to imply that you or your company was in the wrong. Rather, I meant to say that the Daily Mail article reflects poorly on bioarchaeology in general and, unfortunately, on York Osteoarchaeology in particular simply through a mention of your company.

I am aware that the Daily Mail is a poor excuse for journalism, but I was not aware that they publish articles based solely on press releases. If one of our tabloid papers (NY Daily News, for instance) had done such a poor job covering a skeleton I had painstakingly analyzed, I would be upset as well.

Is there a published osteological report on this skeleton that you could share or point me towards? I'm genuinely curious about Romano-British skeletal remains, since Roman bioarchaeology is my research focus, but much of the information we get across the pond is unfortunately this form of sensationalism.
11 December, 2010 11:30

Anonymous said…
Dr. Holst has a point, assuredly - but who *did* lay out the skeleton for this absurd photograph? And if it wasn't someone at York (and someone presumably well-trained and well-educated, as they all seem to be), why were they allowed to touch it at all? I can definitely see why Dr. Killgrove would conclude that York was in some way associated with this worse-than-"Bones" travesty of anatomical orientation, and surely it isn't her fault for taking such a logical step.
11 December, 2010 23:16