Sex Lives of the Rich and Dead 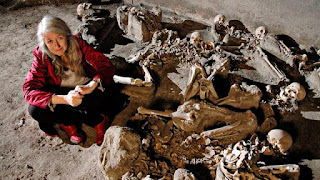 There's an upcoming program on BBC2 called Pompeii: Life and Death in a Roman Town, hosted by one of the world's renowned Pompeii scholars, Mary Beard. Blurbs about historically-based shows always kind of annoy me with their sensationalist overtones, but I recognize it's important to get people to watch the program. Unpacking the summary:

Pompeii: one of the most famous volcanic eruptions in history. We know how its victims died, but this film sets out to answer another question - how did they live? Gleaning evidence from an extraordinary find, Cambridge professor and Pompeii expert Mary Beard provides new insight into the lives of the people who lived in the shadow of Mount Vesuvius before its cataclysmic eruption.

So far, so good. We've situated the program at Pompeii (where Mt. Vesuvius erupted in 79 AD) and asked what people's daily lives were like.

In a dark cellar in Oplontis, just three miles from the centre of Pompeii, 54 skeletons who didn't succumb to the torrent of volcanic ash are about to be put under the microscope. The remains will be submitted to a barrage of tests that will unlock one of the most comprehensive scientific snapshots of Pompeian life ever produced - and there are some big surprises in store.

Oh, so the program is actually about Oplontis, not technically about people from Pompeii itself. Oplontis was similarly a wealthy resort town (although some may argue that it was a suburb of Pompeii) and quite close to Pompeii, yet it was actually on the Gulf of Naples, so life could have been dramatically different, particularly in terms of diet and activities (e.g., fishing). (My research has shown, for example, that people buried in Rome and people buried in Ostia, 25km apart, ate different things, had different frequencies of disease, etc.)

Skeletons can't succumb to anything; people can. But these people from Oplontis were not directly covered by ash, they were killed by the heat (which may have basically melted their nerves and fried off their skin in a matter of seconds).

The remains will also "be submitted to a barrage of tests." You know, just for fun, just to see what's there. Not because someone has a hypothesis. This kind of explanation for the relevancy of a research method would sound quite pejorative in the Americas, where destructive analysis often cannot be performed on skeletal remains, particularly those of Native Americans. Sure, you could argue that a television blurb doesn't have room for a proper hypothesis. But if the public doesn't understand that we are scientists and we set up scientific hypotheses and experiments (we don't just willy-nilly test all the skeletons we can find for whatever we can think of), how will they understand what our research is for and why we would like to be funded by public grants through organizations such as the NSF?

Using the latest forensic techniques it is now possible to determine what those who perished in the disaster ate and drank, where they came from, what diseases they suffered, how rich they were, and perhaps, even more astonishingly, the details of their sex lives.

Forensic techniques? I'm pretty sure that archaeologists first realized the application of stable isotope analysis to human skeletons, not forensic anthropologists. Determining what they ate (and drank?) is done with C/N isotope analyses. Where they came from - Sr and O (possibly even Pb or S) isotope analyses. What diseases they suffered - a standard osteological examination should reveal that. How rich they were - uhm, because of their good diet and low disease load? Because of advanced age or height? Not sure what the "forensic" metric is for "wealth." And, yes astonishingly, the details of their sex lives - wait, what? Are we talking about leprosy or some other communicable disease? Or DNA analysis showing familial relationships? For this reason alone, I want to see the program - which I suppose is the point.

The way the remains were found in the cellar already provides an invaluable clue about the lives of the people they belonged to. On one side of the room were individuals buried with one of the most stunning hauls of gold, jewellery and coins ever found in Pompeii. On the other, were people buried with nothing. It looked the stark dividing line of a polarised ancient society: a room partitioned between super rich and abject poor. But on closer examination the skeletons reveal some surprises about life in Pompeii.

Reveal some surprises because... the stunning haul of gold on one side of the room is related to taphonomy? Are we to assume that people were buried with their slaves? But domestic slaves in Oplontis may not have been as bad off as "abject poverty" - they may have had a better quality of life than agricultural slaves in Italy, for example. Just because a skeleton isn't found with gold baubles on it doesn't mean the person was poor.

At any rate, the 54 Oplontis skeletons (referred to as an "extraordinary find") were found years ago. I'm not entirely sure how long ago, though. There is an Oplontis Project that has been excavating recently. But there is a picture of the 54 skeletons in the Field Museum's Pompeii exhibition, which ran from 2005-06. Why did they decide to test the skeletons now? More importantly, am I missing the peer-reviewed publication that reports the results of the chemical analyses? I know that the peer-review process can take a long time (witness my 2002 MA thesis, which I ended up publishing as an article in 2009), but I'm not very comfortable with public presentation of data until it has gone through some sort of review process. If anyone knows about any articles on the Oplontis skeletons that I didn't find, I'd be interested to read them.

A dissection of the blurb demonstrates just how sensationalistic this kind of writing can be. I am hoping that the actual program adds more nuance and corrects some of the misconceptions in the summary blurb. Unfortunately, BBC2 won't let me watch the program online, so I may have to wait and see if I can get a copy on video. But if any of you in the UK are so inclined, tune in on Tuesday. And then let me know what Prof. Beard says about these skeletons!

David M said…
Just watching the program now. Of the 54 skeletons found in the basement, there are two of equal age, juvenile skeletons, with the same pathology- that of congenital syphilis apparently!
15 December, 2010 10:09