The Doctor in the Photo
Episode Summary 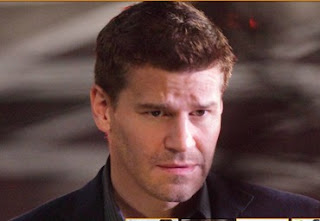 The episode opens with Bones throwing a dinner party for her coupled friends - Booth & Hannah and Angela & Hodgins (but apparently Daisy & Sweets didn't make the cut). Brennan of course is an expert on zoology as well, so she notes that the pelvic diameter of the chicken suggests female, the strong muscle markers indicate it was free-range, and a hairline fracture to the tibial tarsal bone shows that the chicken struggled while her feet were restrained before she was decapitated. After dinner, Booth and Brennan are called to inspect a dead body, whose skeleton has a dogwood tree growing through it in a park in Woodland. Brennan determines the skeleton is female, but the team has trouble pinpointing time of death. From the skull, Brennan finds a high, narrow nasal root and a straight (nasal) profile, indicating the woman was Caucasian. Good dental work indicates she wasn't poor. At a glance, Brennan estimates she stood 175-180cm, or 5'8"-5'9"; she had an athletic frame and was about 63kg (143 lbs). The woman also wore a dolphin ring very similar to Brennan's.

The entire tree with the skeleton is taken to the Jeffersonian. Brennan finds a longitudinal fracture to the right temporal bone, which could represent the fatal blow. A (perimortem) night stick fracture to the left ulna indicates the victim was holding her hands up when she was hit. Further, bony growths on the 3rd and 4th medial phalanges (of her right hand) are occupational markers that Brennan and Saroyan tie to a seamstress, artist, or medical professional. Meanwhile, Hodgins has used dendrochronology to determine that the time of death was last November. Based on the physical description, the possibility of an occupation, and the time of death, Hannah (using a laptop and Bing, she claims) finds out that Dr. Laura Eames went missing at that time and was never found.

When Brennan gets Dr. Eames' records, though, she starts to have a bit of a breakdown: the doctor looks just like her, talks just like her, and is similarly rational and empirical. Brennan can't sleep and comes into the Jeffersonian at night, chatting up the night watchman, Micah (Enrico Colatoni). She finds that the victim was stabbed in the ribs, but that they had healed 4 to 6 months prior to her death, when she was killed by a blow to the head. After talking with the medivac pilot and Sweets, Brennan catches up with Hodgins, who determines that the particulates in the victim's head wound include a reflective paint or other material. Brennan suspects the father of a boy who needed a heart transplant, Dworsky, but he has an alibi. Everyone suggests that the doctor was in Woodland buying drugs; Brennan refuses to believe it. To prove this, Hodgins puts a piece of clothing (skin? tissue?) from the victim into mysterious liquid, and it turns purple, indicating the presence of heroin. Brennan continues her conversations with the victim after hours and discovers that she wasn't hit on the head, rather she was thrown onto her head. The psych evaluation of the doctor that Sweets does reveals she was logical and detached in order to deal with so many people around her dying. He further suggests that she put herself into dangerous situations out of despair or a desire to feel something different, which the medivac pilot corroborates.

In the end, Brennan figures it all out. Dr. Eames went to Woodland to speak with the Whalings, whose son was brain-dead but who wouldn't allow his organs to be donated. She wanted to convince them to donate his heart to the Dworsky boy. Dr. Eames bought heroin for the heck of it, apparently, and had it on her when she was accidentally hit by a car. She hit her head on one of those raised reflective plastic pieces in the road; and Brennan assumes that the hit-and-run driver buried Dr. Eames in a shallow grave in the park.

After several days of being personally affected by the victim and failing to remain objective, Brennan confesses to Booth that she thinks she made a mistake in rejecting him. To his credit, he is firm with her and says that Hannah is not a consolation prize. Brennan has indeed missed her chance. Back at the Jeffersonian, Brennan looks at the case file with fresh eyes and realizes that Dr. Eames doesn't look exactly like her. A combination of sleep and distance from the case made her realize what was really in front of her.

Pretty good this week, honestly. The back-and-forth between Brennan and Dr. Eames started off normal, then went to kind of creepy, then settled on a middle-ground between over-emotional and over-analytical. A random extra gets in a line from T.S. Eliot: "I will show you fear and a handful of dust." Brennan and Micah make good foils for one another, paralleling the Brennan-Booth (and Dr. Eames-Medivac Guy) relationships. Brennan notes that "if there is no such thing as objectivity, there's no such thing as measurement, which means empiricism is meaningless." Micah later insists again that "there's no such thing as objectivity." For the most part, the struggle within Brennan to balance objectivity (as a hallmark of science) and emotion (as a hallmark of humanity) was nicely written and - at least for television writers - subtle. Well, until the end of the episode, when Brennan has a breakdown in Booth's car and confesses that she regrets having missed her chance with him. It's not the worst dialogue in the world, it's just the most expected (and thus rather cliche).

I am left wondering, though, if Micah is real or not. Booth didn't seem to know who he was, so I think the writers left it kind of vague. (IMDB.com tells me that he has not shown up as a guest star before and that his name is Micah Leggat. Which is an anagram for... Magic Leg Hat? I've got nothing.) Thoughts?

Forensic Mystery - B. We are drawn into the victim's story because Brennan is drawn into her story. The fact that the victim had absolutely nothing to lose (Brennan's words - because, you know, being the best cardiac surgeon on the east coast isn't worth anything if you don't have a man in your life?) actually made her more compelling. Points taken off, though, for the probable misogynist undertones to a lonely, workaholic woman.

Forensic Solution - B. The science was actually believable tonight, except for the way Brennan could tell height/weight at a glance. Points taken off for that and the discovery of the very reflective road thingy that killed the woman with blood still on it.

Drama - A-. The Bones writers made me care about this episode. In spite of the fact that I knew the victim would end up not looking like/sounding like Brennan, I enjoyed how the writers got there. Points docked only because I think the writers tried to humanize Brennan too much in this episode: screwing up FBI work, relying on intuition, and throwing herself at Booth. Had they extended it over two episodes, I think it would have worked better.

Anonymous said…
Actually, I noticed at one point that the individual's left tibia was actually a right tibia, or was upside down--the medial malleolus was facing laterally.
10 December, 2010 11:25

Cynthia Reeves said…
The episode was very Christmas Carol like. I don't think we will see Micah again. My impression was that he represented the three ghosts from the Dickens tale. He was part of Brennan's imagination just as the ghosts were part of Scrooge's dream. His purpose was to show her that it is not too late to change...but is it?
10 December, 2010 15:17

Kristina Killgrove said…
Cynthia, I didn't even notice the Xmas Carol parallel. Good call! This is why I try to stick with critiquing the forensics rather than the plot. :)
10 December, 2010 16:40

Covan said…
Okay. I think I need to start following you because your reviews are amazing! I agree with the cliched story line but the parallel to the Christmas Carol was pretty cool :) The conversations between Brennan and the victim was interesting and it will definitely be added to the list of 'odd' things happening on the show. Think back to when the ghost of Parker during the latest Grave Digger episode in Season 5.

Overall, one of the better episodes of the season as it seemed to drone on a bit with less drama and more forensics. Although I try to see it less biased but I really dislike Hannah. This is my opinion but I don't want the producers/directors jumping the shark and immediately putting a BxB relationship. Mainly because that would conflict with real life procedure where co-workers cannot break the fraternization rules.

Hope said…
I, too, was questioning Micah's existence, but I feel that his non-existence would have been addressed prior to the conclusion of the episode. It's not the type of detail that television writers normally leave out, is it? Not in my experience, at least; and I'll admit I don't watch a lot of television, but it's my belief that Micah is real, and Booth was just confused as to his involvement and why he hadn't heard his name before. After all, Booth is close to her, and Brennan isn't known to trust the advice of strangers. Also: Micah and Brennan have an established rapport, Micah claims to have worked at the Jeffersonian for nine years, and at the end of the episode he says that he "has his own sad story". To me, these details make it seem unlikely that Micah is a figment of Brennan's imagination. Those are my thoughts, since you asked.
Oh, and to remark upon the probable misogynistic undertones: I think that Brennan was simply stating what she assumed were the victim's thoughts. Brennan approached the pilot after hearing Sweets' psychological evaluation, and that evaluation seemed to hint at the fact that Eames felt that she had nothing to lose. I'd argue that, from Eames' emotional standpoint, yes: she did have nothing to lose, because she could not experience any of the joys of her job for risk of experiencing the sorrows, and it was because of that struggle that she gave up the opportunity to have a life with someone who loved her and very possibly could have helped to make her happy. This is all from her standpoint, of course. I'd also argue that she could have recovered, with time. The point is that someone's feelings and thoughts and perceptions are not necessarily reality, at least not as it is interpreted by the majority. So, it could be argued that, while Eames was clearly not pleased with her life after having refused the pilot, and Brennan is clearly not happy with having refused Booth, they do not (or, in Eames' case, did not) feel as though their lives are worth nothing simply because they don't (or didn't) have men in their lives.
I apologize if this is terribly incoherent. I have yet to sleep and it's 6:33 AM. Hope you're having a lovely morning.
22 December, 2010 05:34

Anonymous said…
I need to rewatch the episode, but there were no scenes in which Bones was not present. This leads me to believe that it was all a Dream. She mentions earlier in the season that she had dreamed of her and Booth together while on the island.

I think this was her subconcious' way of dealing with the fact that her and booth aren't getting back together. But we'll all have to wait until the 20th to find out.
04 January, 2011 12:20