Sex and Gender of Egyptian Mummies 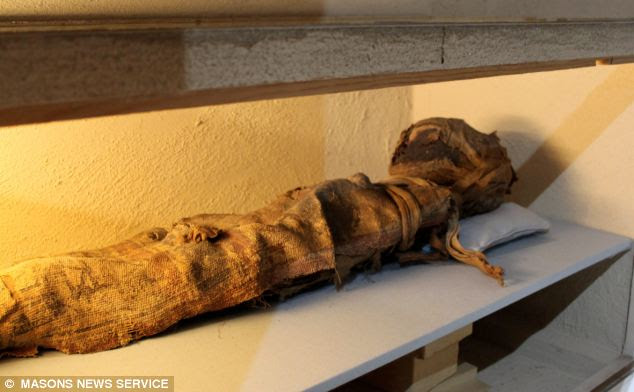 This Egyptian mummy (c. 350 AD), which has been in a museum collection in England since the end of the 19th century, was recently subjected to a CT scan. The news coverage isn't great, as I had to read between the lines of the dumbed-down popular science of it. In essence, previous assessment of the mummy in 1993 had concluded that it was a male child of about 7 years old who had possibly been murdered. The CT scan last week appears to have confirmed from the soft tissue that the child was male - however, he was wrapped in clothing that had traditionally feminine symbols on it and was buried with a bracelet and breast cones typical of girls and women. He was also younger than expected, around 4-5 years old based on dental development and epiphyseal fusion. The injuries he sustained - a broken clavicle and a fractured skull that resulted in hemorrhage - seemed to have happened a few weeks before his death (I assume based on evidence of healing/remodeling of the bone).

Oddly, both the articles from this week's Daily Mail note that a "detailed analysis of pelvic bones and teeth confirmed the mummy is a boy despite its female adornments." As I've harped on in the past (mostly in my Bones review posts), unless the researchers have a large collection of pelvic bones and teeth from children of known sex from Roman Egypt to which they can compare, it is often little more than a guess whether the child is male or female. Since the researchers did a CT scan and had soft tissue, I would imagine this piece of data was the key to their estimation of sex. It's therefore strange that the Daily Mail chose to focus on the skeletal tissue rather than the soft tissue.

The coverage of this mummy also has some issues with the difference between sex and gender. One of the researchers who worked on this mummy told the Daily Mail, "It's a boy. It's not always obvious, and you need to know what you are looking for." I'm not in any way an expert on Egyptian mummies, but I can unequivocally state that she is right - well, partially: gender is not obvious from physical remains. But I can't say that she's right that "it's a boy" - after all, according to the article, this child was buried with feminine accoutrements. Not just in a shroud usually reserved for girls, but with breast cones. The child's sex seems clear: the child was male (if I am reading correctly that the CT scan found evidence of genitalia). But the child's gender is not at all clear. I wonder how many other Egyptian mummies have a disconnect between their biological sex and their culturally-constructed (burial-styled) gender? I recall from an art history course that the amazing Roman mummy portraits often were younger than the mummy itself and sometimes of a different sex. Are sex and gender in Egyptian mummies (especially children) otherwise known, studied, or understood phenomena? A quick google search shows that this is not the first time a mummy turned out to be male in spite of presumed feminine burial styling. How different will our study of ancient Egyptian burial practices be if we find out through subjecting mummies to new technology that they are not the sex/gender we think they are?

onix said…
if you want a crazy comment, i had an aunt that wanted a daughter so badly it was said she dressed up her son like one for a couple of years.i would think the kind of behaviour is so uncommon to us because modern society has some very strict religious taboos around sexuality. i am not sure but it could well be egyptian religion did not feature such strong sexual taboo. i agree that the soft tissue should reveal the sex. in principle it tells something about teh position of women (most would vote for a daughter) and it must be assumed for now they were upperclass, to provide a level of privacy to allow for crossdressing the child.
06 December, 2010 19:00

Anonymous said…
I stumbled upon your blog in the strangest way only to find something that *almost* directly coincides with my own research! Amazing really. I was watching a youtube video of this Matt guy that dances all over the world, went to his website, read that he has a Darwinian Tubercle, googled Darwinian Tubercle, found your post about your and your daughter's Darwinian Tubercles, saw your post on sex and gender, and voila! Here I am.

It's particularly fascinating to me because I'm doing a PhD in Classics focussing on sex and gender in the ancient world (more specifically I study transgendered identity, which ties in perfectly with this mummy you're talking about). Anyways, just thought I'd share how amazed I am that I found this very post without actually looking for it.

emily said…
i just came across your blog and i love your Bones reviews! i recently took my first physical anthropology class and learned that sex cannot really be determined in children just by looking at the bones...as a Bones fan i was surprised because Brennan does it all the time!
10 January, 2011 22:51