I recently came across the Archaeobotanical Database at the University of Tuebingen. The geographical scope of the freely-accessible database reaches from the eastern Mediterranean to the Near East, and the temporal context covers the Chalcolithic to the Medieval periods. After you register, you get a choice among four options: a list of the over 250 archaeological sites with botanical information, a list of all the taxa included in the database, a search function (with criteria including side, region, time period, taxon, genus, and family), and a distribution map (with criteria including period, taxon, genus, and family).

My own research into the ancient Roman diet has shown that immigrants to Rome were more likely to have consumed plants with a C4 photosynthetic pathway than were locals, perhaps because they came to Rome from geographical areas where these plants were more plentiful. The most common C4 plant in the ancient Mediterranean was (common or broomcorn) millet, whose genus is Panicum. I did a quick search in the database and generated a distribution map of all the sites that had reported Panicum in archaeological context: 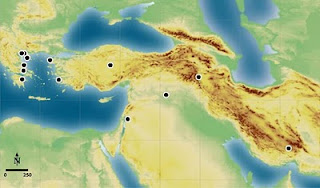 Surprisingly, it looks like quite a lot of millet has been found in eastern Greece and unsurprisingly that little millet has been found elsewhere in the Mediterranean. Millet was not a highly prized grain for human consumption and is less likely to be found in a household context than wheat, for example. Clicking on each of the 17 sites leads you to a bibliography for the archaeobotanical remains found at the site. When I do a detailed search on Panicum in Greece, however, the results show that only a trace amount of millet was found in every site except Iron Age Kastanas (Macedonia), which had a huge proportion of millet in various phases. (It is also the only site in Greece that has evidence of Setaria, the genus for foxtail millet, and the second most common millet in the Mediterranean.)

It seems that in the eastern Mediterranean and the Near East, millet was not eaten as a primary grain anywhere except perhaps Kastanas. Of course, that site could represent a livestock foddering area, as cows and goats could be fed millet while humans consumed wheat and barley. Or perhaps people were actually eating a significant amount of millet. If I were to read some of the linked bibliography on the site, I might learn whether or not there are human remains from the site and if their skeletal tissue has been tested using carbon isotope analysis.

I wish a database like this existed for the entire Mediterranean. It would be really helpful to amalgamate the archaeobotanical data for the Imperial period in order to look at the ancient Roman economy and diet. And of course it could help me narrow down the geographical locales from which some of my C4-eating, anomalous-Sr/O immigrants came.