This is quite possibly the coolest use of the web I've seen in a while. History Pin is an interactive, collaborative website that allows you to "pin" old photos onto modern Google maps. With enough pictures and contributions, you can virtually "excavate" the built landscape of the world and the people who pass through it on a daily basis. For example, here is a photograph of the integration of the Carolina Theatre on Franklin Street in Chapel Hill in 1963, superimposed on a street view of Franklin today: 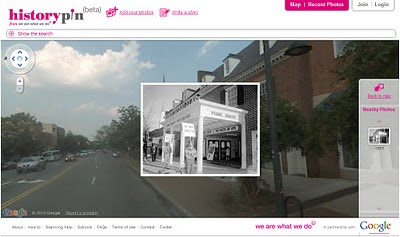 The Carolina moved from this location around the corner to Columbia, but closed in 2005. I think much of the theatre is the brand-new Walgreens near the corner of Franklin and Columbia.

In my archaeology lectures, I often tell the students that one way to learn about the past, particularly about past landscapes, is to ask a long-time resident. I grew up in Charlottesville, Virginia, I tell them, in a little neighborhood called Woodbrook. When we moved there in 1981, the expansive lot across Route 29 from us was a horse farm. In my teens, a property developer turned it into a huge shopping development with Kroger as the anchor grocery store. I worked at this Kroger and, while out on a walk one day on my lunch break, came across a display of some of the artifacts that were found when the shopping center went in. Most were Civil War era, as it was the location of the Battle of Rio Hill. But there was undoubtedly Native American occupation in the area, as the neighborhood next to mine, Carrsbrook, was the site of the famous burial mound that Thomas Jefferson excavated and detailed in his Notes on the State of Virginia. From the original Native American inhabitants to the colonial presence to the Civil War to the internet (my old neighborhood has a blog!), there is a wealth of information to be learned about a landscape just by asking people what they remember.

I'm incredibly pleased to have found History Pin and am currently pondering how to incorporate it into my lectures and/or assignments for next semester. Maybe some extra credit? Or a recitation section activity? Pin a childhood picture to Google maps and write a brief story about it, perhaps?