I'm reprising a post from last Halloween about the Italian tradition of baking ossa dei morti and considering whether or not to actually make them this year. Think I can give them out to the few trick-or-treaters that come to my house?

In completely separate research streams this week on Roman funeral customs and Halloween, I came across an Italian All Soul's Day tradition rooted in the Roman Lemuralia, or the festival honoring the dead. During the latter, the paterfamilias would fill his mouth with black fava beans, which he would take out one by one and throw over his shoulder as he walked through the house. The lemuri, or souls of the deceased, would stoop to pick them up (as fava beans contained the souls of the dead) and leave the house. When Christianity took hold, traditions such as this were frowned upon. The practice of purifying the house of souls with fava was transformed into ossa dei morti, cookies (sometimes called fave dolci) made with almond paste, that are shaped to look like finger bones (or, in some traditions, tibiae). If only I had stayed in Italy another month in 2007, I might have found out about this tradition earlier (and gotten some awesome recipes from my friends' mothers and grandmothers).

Since the recipe was so easy, I decided to make some ossa dei morti this afternoon. I added a tad bit of marsala since the dough seemed dry, formed the dough into vague finger shapes, and baked. It was really, really hard to get the cookies off the trays. There's no butter in the dough, so the cookies don't just slide off the pan. Perhaps if I had used parchment paper or something else, they would have come off more easily. Here's a picture of the ossa dei morti I made: 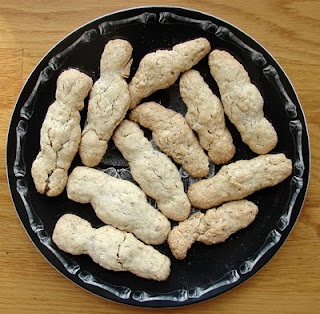 I plated them on a platter with actual finger bones on it (specifically, a ring of 5th metacarpals) for comparison... and because I wanted an excuse to use my new, awesome Halloween plate.

The cookies aren't very good, though. I thought they would be kind of like biscotti. But they're a bit chewy. I used almonds rather than a mixture of almonds and hazelnuts, so they taste mostly like marzipan. I'll try them dipped in coffee tomorrow morning, but they need something else - maybe a chocolate coating? Ah well, at least my house will be purified of dead spirits - important for someone with dozens of books about dead spirits in her house.