My esteemed colleague at SUNY Cortland, Jodi Blumenfeld, posted a story that ran in yesterday's Cortland Standard about her Forensic Anthropology class. They did an outdoor mock crime scene along the lines of the one I did when I taught the same class at Cortland in 2008. The scanned article that I got from her is below, followed by a transcript. I should also mention that one of my former students, Heather Beardsley, is now Jodi's TA and just barely missed being in the newspaper photo below. Way to go, both of you, for bringing some visibility to anthropology at Cortland! 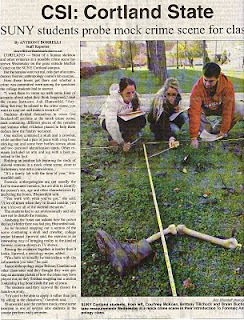 CORTLAND - Most of a human skeleton and other evidence at a possible crime scene lay strewn Wednesday on the grass outside Moffett Center on the SUNY Cortland campus.

But the remains were not real, only part of an introductory forensic anthropology course's lab exercise.

How those bones got there and whether a crime was committed were among the questions the college students had to answer.

"I want them to come up with some kind of scenario about what they think happened," said the course instructor, Jodi Blumenfeld. "Anything that may be related to the crime scene, you want to map out and make a record of."

Students divided themselves to cover five blocked-off sections at the mock crime scene, each containing different pieces of the remains and various other evidence planted to help them deduce how the fatality occurred.

One section contained a skull and a crowbar, while another had a pair of jeans with a leg bone sticking out and some beer bottles strewn about and two personal identification cards. Other remains included an arm and a leg with a boot attached to the foot.

Holding an outdoor lab featuring the study of skeletal remains in a mock crime scene, close to Halloween, was not a coincidence.

"It's a timely lab with the time of the year," Blumenfeld said.

Forensic anthropologists are not usually the first to encounter remains, but are able to identify the person's sex, age and other characteristics by analyzing the bones, Blumenfeld said.

"You work with what you've got," she said. "A lot of times, when they're found outside, you don't recover all of the skeletal elements."

The students had to act professionally and take care not to disturb the remains.

Analyzing the bones can indicate how the person died and whether there was foul play, Blumenfeld said.

As he finished mapping out a section of the scene containing a skull and crowbar, college senior Ishmael Sprowal said the exercise is an interesting way of bringing reality to the kind of forensic science shown in TV shows.

Piecing the evidence together is harder than it looks, Sprowal, a sociology major, added.

"You have to actually be meticulous with the information you take," he said.

Junior anthropology major Brittany Gambini and other classmates said they thought they were getting an accurate picture of how the crime may have played out, as they finished mapping out a section containing a leg bone inside the pair of jeans.

The students said they enjoyed the chance for hands-on study.

"It's cool to be able to apply it rather than just by sitting in the classroom," Gambini said.

Blumenfeld said the outdoor mock crime scene exercise is one of several labs students in the course perform each semester.