Jeff sent me a link to this AP story about a lower-class necropolis uncovered last year in Rome after a bunch of tombaroli (grave robbers) were found searching it for goods. What the archaeologists found was a cemetery with somewhere between 250-320 graves (it depends on the report you read), most of whom were male and most of whom suffered from a variety of pathologies that are interpreted as being evidence of "transport and carrying of heavy loads, in an especially humid environment..." I'm not sure how they can tell the climate from spinal pathology, but I don't doubt there was spinal pathology. I would question just how much they found, though, in light of a presentation I saw at the AIAs where an Italian researcher classified normal vertebrae as having massive herniations. It is possible, however, that this was a cemetery for slaves or manual laborers, which would explain the disproportionate number of males and the excessive pathologies that lead one of the Italian articles to describe the men as "camels."

Unlike the AP story, the Italian one in La Repubblica has 9 photographs and a video of archaeologists recovering a skeleton. The video is hilarious, with really bizarre music, so I encourage you to click here even if you don't know Italian (I can't seem to steal and embed it). Here are some of the photos I took from La Repubblica, with translated captions.

1. The site of Casal Malnome, on the outskirts of Rome near the airport. It dates to the 1st-2nd century AD, around the same time as both of my sites, and was likely the burial place of lower class individuals. 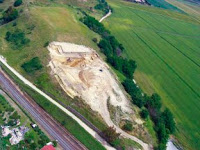 2. Tomb 115, a cappuccina-style burial complete with ceramic tubing to the surface, where loved ones could pour liquid offerings of olive oil or wine. 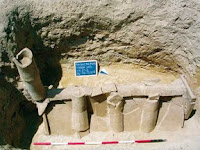 3. One of the skeletons, with a small pottery vessel at his/her feet. 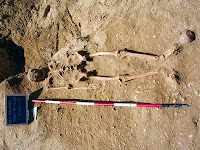 4. An interesting necklace made of amber, seashells, and teeth, found in a child's tomb. 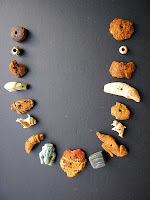 5. An oil lamp decorated with a scene of grapes. 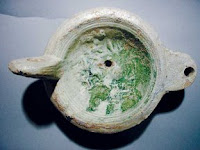 6. An "obol of Charon" - a coin placed in the dead person's mouth to pay the ferryman to cross into the underworld. Some of my skeletons also had coins in their mouths. 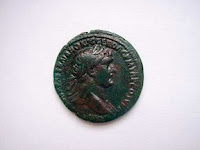 7. Saving the best for last... according to the head of the anthropology service of the archaeological superintendency of Rome (the woman I worked with), this man's jaw was fused to his skull. Additionally, she thinks that he had dental work done so that he could be fed through his teeth, probably with thin gruels or other liquids, as he could not chew. (The caption at La Repubblica says that he was born with a closed mouth and could not breathe, but I find both of those to be unlikely.) 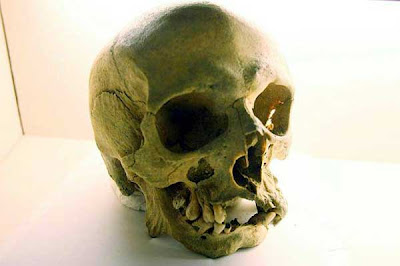