Skip to main content
Posted by Kristina Killgrove May 15, 2008

I'm a sucker for cemeteries and tend to spend hours in them reading tombstones and trying to work out genealogies. I visit cemeteries in every major European city I go to, and I was thoroughly geeked out when I moved up north and could track gravestone iconography a la Deetz-n-Dethlefsen. So one of the final projects that students could choose was to map a local cemetery and figure out some of the genealogy. 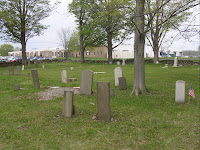 I know nothing about this area of the country, although Patrick told me that much of this area of central/upstate NY was parceled out to Revolutionary soldiers. Cortland has a large, oldish cemetery in the center of town near the university, but I was very curious about a small one located just across the street from Wal-Mart on Route 13 south. The headstones are all askew owing to the sinking of the ground, and there isn't really anywhere to stop and park. I also couldn't find anything on the cemetery by checking the usual online sites that list graveyards and people buried in them. So I was happy when two students, Natalie and Jeremy, decided to map the site and give me a little more information that they gleaned from the local historical society.

The ladies at the Historical Society called it the South Cortland Cemetery, 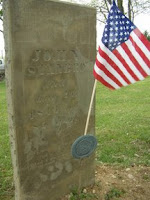 although there apparently are no records that indicate the actual name of the graveyard. Someone does, however, maintain the cemetery, as American flags show up on occasion to honor the veterans. Jeremy reported that it was odd to see a 50-stars American flag gracing the grave of a Revolutionary War veteran. Natalie reported that one of the largest families buried in the cemetery was John Stanbro and his descendants, which included at least 13 children. Interestingly enough, John's relations spelled their name in a variety of ways, including Stanbrough, Stanborough, Stanbury, and Stanberry, making genealogical tracking a bit more complicated for my students.

I liked what they did for mapping.

I had asked them to triangulate to map the headstones and draw them on graph paper. While they did triangulate based on the stone walls that demarcated the cemetery, they plotted only one central point for each headstone and footstone, then graphed it in Excel using different colors and shapes for headstones, footstones, trees, and a tree stump. This is how their graph came out. I think it's interesting that the footstones are clustered on the east side of the cemetery, whereas there are basically none on the west side - perhaps it's a change in burial style, but I don't know the dates of the headstones they mapped. Rather than genealogy, I should have asked them to record the iconography on the stones, as I'm curious if there are lots of willows or death's heads in this cemetery.

I do, however, like this saying carved into one of the gravestones: 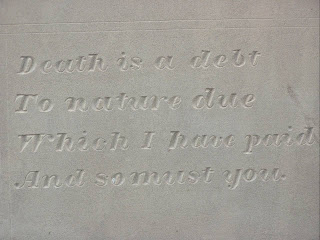 Andy said…
Have you or your students thought about posting findings at interment.net? I didn't see your cemetery listed.
15 May, 2008 13:50

Kristina Killgrove said…
I knew it wasn't on interment.net, but I thought maybe I just hadn't done enough research to find this cemetery. Perhaps I should have made the students record the information and put it online rather than map it.
15 May, 2008 13:56

jhoeschele said…
Kristina: Am a Cortland resident interested in this cemetery since we moved here in 1988. Have just decided to take it on as an personal/historical research project...especially in light of recent development on Route 13 that might one day threaten this nice little cemetery. To that end, would you object to my posting the map your students developed on a website I am setting up (have really just begun to do research: jotted down surnames in the cemetery, doing google research on them, taking photos of some of the headstones, etc...have yet to carve out time at the historical society, clerk's office, etc. but will be doing so)... It would also be neat to add a link to your blog page on the same subject?
I assume, since you say you assigned the project to some students, that you are a prof at a nearby college? Have you learned anything about the site since this post in 2008?

Kristina Killgrove said…
John - I'm glad that someone is taking on this graveyard as a project. It needs some more online visibility like the other ones in town. Sure, feel free to link to my blog - and I don't think my students would mind if you posted their Excel map. I might be able to get a copy of the file from them if it would be useful to you.

I was teaching for a semester at SUNY Cortland, but now I am back living in Chapel Hill, NC, finishing up my PhD in anthropology. Since I moved shortly after the end of the semester, I haven't learned anything more about the cemetery. A few of my students are still at Cortland, so if you are looking for volunteers to help with your project, you might want to try contacting the anthropology department there.