Skip to main content
Posted by Kristina Killgrove May 18, 2008

The last two projects I haven't yet posted about include one involving projectile trauma (gunshot wounds) inflicted on some pig heads and the effects of a variety of rusty implements used to dismember bone.

1. Jennifer got pretty into this project, getting 3 free pig heads from a local meat market (thanks, Cudlin's!) and enlisting the help of a friend with guns to teach her to shoot and use the larger guns to wound the poor pigs. She noted that the larger-caliber guns predictably made a much bigger mess, splattering pig brains and pig eyes all over the place. All of the wounds were made with high-velocity weapons, so the damage to bone was pretty significant. She added an element to her project by asking her mom to bury the pig heads in the garden and then trying to find them (i.e., using archaeological techniques to figure out where the depression/discolorations in the ground would indicate something was freshly buried there). Here are some of the pictures from her project. Top left, Jennifer is taking a pig head (not sure which one - she named all three) out of its ice packaging; top right, her friend shows off his arsenal; bottom left, pig heads macerating in water, bleach, and detergent; bottom right, a picture of the lower jaw of the pig after being shot and defleshed, showing an exit wound. 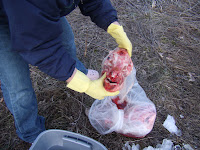 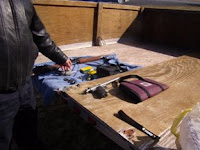 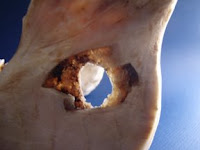 2. Heather designed her own project on rust transfer to bone. She was going to do a straight-up trauma project, but her brother told her that he had a whole bunch of rusty tools at his house. So we talked about rust on bone and found that there really isn't any forensic research that has been done in terms of rust transfer. One of the problems is that there are apparently many kinds of rust and there isn't one simple test to see if there are rust particles on something (i.e., you can't just swab a bone with a chemical to see the rust show up). Heather got a bunch of pig legs (after some amount of convincing the butcher that a thigh had a single bone and not two bones) and inflicted a variety of trauma: she used a rusty hoe/shovel/something to break the bone, and she used a flimsy rusty tree saw as well. What she found was that most of the rust was transferred to the soft tissue and marrow, with only a little remaining in the cortical bone of the long bone shafts. She'll probably post more about her project in the comments (hi, Heather!), but I wanted to post a couple of her videos that really made me laugh.

Unknown said…
Me <--- not a lick of common sense. None whatsoever.

(Personally, my favourite video was the one of me and my brother sniping at each other while I hacked away with the first saw. It brought back fond childhood memories-- of sniping, mind you, not dismemberment.)
20 May, 2008 01:14