Skip to main content
Posted by Kristina Killgrove May 07, 2008 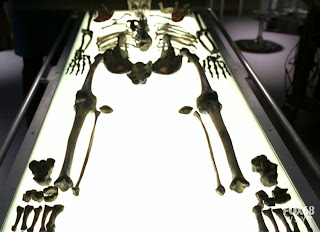 I like to use the TV show Bones as a teaching tool. It's actually not all that bad sometimes - sure, the fact that she works with the FBI is pretty far-fetched, and her involvement with the case is laughable, but sometimes the forensic anthropology isn't all that bad. Last week, for example, they used strontium isotope analysis to determine where someone was from. It was ludicrously precise, but the general concept was right. So I was actually surprised by this Monday's episode. In a pass-over of a skeleton during the opening credits, I noticed that the pelvis was upside down. Thinking maybe there was some connection between it and the bizarre British skeleton from a few posts ago, I rewound and stepped through it. Nope, the pelvis is completely upside down and backwards. For no good reason. Also, the fibulae are misplaced on the inside of the calves. And the clavicles aren't sided correctly. I could almost overlook that. But an upside down pelvis? It's like an epidemic now. Do they think I won't notice?