I didn't bring a proper camera to Chicago, but I did snap some pics with my cell phone to chronicle my trip.

For the first time ever, I shelled out big bucks to stay at a conference hotel. 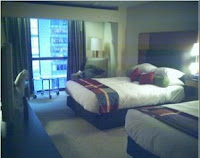 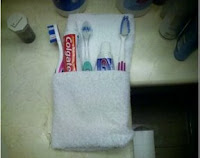 It was much more convenient, of course, but actually lacked some conveniences that you find at smaller hotels - there was no free wireless, there was no free shuttle from the airport, the built-in hairdryer didn't work. But it was decorated nicely as you can see in the picture. They even provide you with a catalogue from which you can buy the linens and other accessories so that your house can look like a standard Hyatt hotel room. We did discover, however, after housekeeping came that we were paying for the art of washcloth folding. Don't our toothbrushes look nice and cozy? 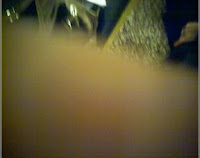 My session was on Friday, and I've posted below on the technical difficulties. This is the photo that I accidentally snapped while frantically trying to get the lappy to work while simultaneously talking to the A/V people and checking the time to see how behind we were and whether the 100 people in the room would leave or not. 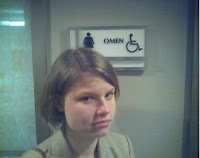 Friday night meant a bunch of receptions from a variety of universities. After a dinner out with John, Arum, Dave, and Erika, we headed to the UNC-Duke reception but came at the tail end. The party soon broke up, so Erika and I headed to find another interesting reception. Along the way, we stopped at the bathroom and laughed hysterically at this sign outside. I made Erika pose with it, and now I've assigned it to my phone for whenever she calls me.


But Chicago was lovely. 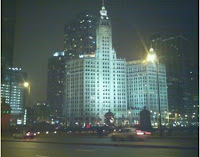 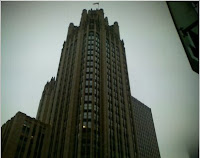 There are big, beautiful skyscrapers, the streets are clean, and the people are amazingly friendly. On Saturday, I skipped the conference and went shopping along the Magnificent Mile, snapping this pic of the Chicago Tribune building, and buying a new forest green peacoat and a brown herringbone skirt. In the evening, I snapped this picture of a whole sea of skyscrapers near my hotel and on the other side of the river. Small white Christmas lights were still strung in the trees along the street, and it was a nice effect. 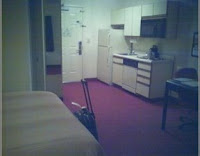 My flight out on Sunday night was delayed, which meant I would miss my connection to Ithaca. I opted to rebook for the following day and stayed at a hotel near the airport. It was 1/3 the cost of the conference hotel and included free internet, DVD rental, sodas, and had a full kitchen in the room. I got a pizza delivered to my room and decompressed from the conference. The shuttle driver the next morning was talking endlessly about how he manscapes his eyebrows. Strange. But I'm back in Ithaca. The conference was fine, albeit a bit boring this year and pretty badly organized. I hope next year is better.