Stuck a feather in his hat and called it.... 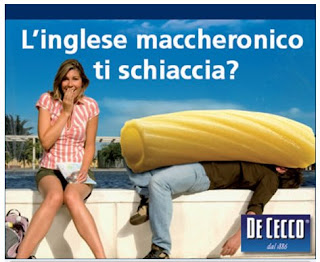 I was on the tram for two hours today, which gave me a lot of time to see billboards. Most were for movies, but my favorite are the ones advertising English lessons at a place called The Wall Street Institute. Patrick commented on their name after seeing an ad on the metro - Wall Street is kind of a stupid name for a language instruction company, but it's widely recognized as American (Italians don't want to learn British English) and high-class (as it relates to the stock market). Wall Street's new ad campaign, however, actually amused me. Their slogan is, "L'inglese maccheronico ti schiaccia." I was curious about the word maccheronico considering the giant piece of pasta in the ad. It seems that the Italian word maccarone dates back to at least the 12th century and generally means short, dry, tubular pasta. This was back in the time when the word pasta literally meant paste, or the dough from which maccarone was formed. But around the 15th century, maccarone gave its name to a literary style, maccheronico. Peasants of the time were referred to in a derogatory manner by the kind of food they ate most - maccarone or gnocco - noodle-heads. Maccheronico writing was a pastiche of the educated, high-class Latin of the day and vernacular Italian. Today, of course, the language of scholarship and international relations is English, and maccheronico has been repurposed to describe a way of speaking that is not quite Italian and not quite English. The slogan of the Wall Street Institute is thus, "Is Italglish crushing you?" I love that the Italians have a word for Italglish and also that it can be metaphorically represented by a piece of ziti. Incidentally, national Maccheronico Day is September 23, a day which celebrates, as one blogger put it, the "tried-and-true academic technique of embarassing people into learning."