I periodically update some of you on the questionable fashions of Italians. Today's installment is on t-shirts I've seen in the past week. Just for you, I thought I'd do mockups of these shirts (since I couldn't find them online) to illustrate the daily visual assault on my eyes.

A few days ago, 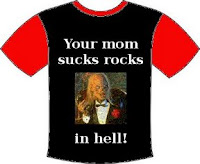 I saw this shirt on a guy in his early 20s waiting for the tram. It mostly makes sense, and I suspect that he knew what it meant. It also doesn't have actual swear words, unlike this belt I saw the last time I was in Italy. The crypt-keeper was a nice touch, though.

On the tram this afternoon, I saw a woman wearing this shirt. 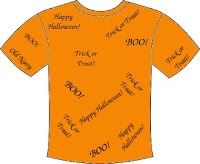 A Halloween shirt in July, eh? Sure, it's not an Italian holiday, but didn't she think to figure out what the shirt says? Maybe "trick or treat" is too advanced, but "happy Halloween" isn't ambiguous, and as you can see it's black writing on an orange shirt. Also, how did she find an Old Navy shirt in Italy? Maybe all those clothes that I give to Amvets actually get airlifted over the Mediterranean to fuel some sort of tshirt cargo cult. That would explain the Italian guy Erika and I saw in Tivoli wearing a 1988 Washington Redskins tshirt.

One of my colleagues was wearing this shirt. 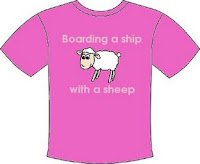 The little graphic (badly reproduced here) was quite cute, and they're all perfectly valid English words, but can anyone tell me what it's supposed to mean? Does it refer to Noah's Ark? Is someone taking their pet on a cruise? My guess is actually that some Italian thought it was hilarious that in English the words "ship" and "sheep" are pronounced the same. They're not, of course, but Italians can't tell the difference between those vowel sounds. In true Italian style, the text was light pink on a medium pink background, meaning I had to stare at her boobs to read the shirt.

And finally, also on the tram, I saw a guy in his early 20s wearing this shirt. 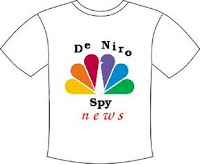 I stared at him the entire time, willing the graphic to make the least bit of sense. I was trying to convert the pronunciation of NBC News into Italian, since I know that the Italians love to parse English words by converting them to the closest-sounding Italian words. But I just can't get anything out of this shirt. I suspect it's just Engrish at its best. "Hey, Guido. How can we sell more shirts?" "Well, Fabio, we could put De Niro's name on it. All Italians worship De Niro." "Great, yeah. What else?" "I dunno. What say we throw in the word "spy"? That sounds cool. And "news," 'cause then we look smart." "Awesome. While we're at it, why don't we just rip off the NBC peacock? Surely trademark infringement doesn't cross international boundaries." I really like the complete randomness of this shirt. Maybe I'll make some Cafe Press stuff out of it and sell it to fund my research!

If you have a story you want to submit to DeNiro Spy News (motto: "You talkin' to me? Shit, I just blew my cover!"), by all means, post it in the comments!

Anonymous said…
At least the ones you see have verbs conjugated correctly and words spelled correctly...the ones in Spain were...horrendous
14 July, 2007 22:11