I work at the very top of a strange warehouse. It looks kind of like a parking deck, in that it is spiral-shaped, accessible by a ramp and no stairs. There are inconspicuous doors located at every level, although if you're walking up the path, you can't tell where one floor ends and the other begins. This building is located within the confines of a high school, but the high school doesn't use it. Because it often remains open, people who sneak into the schoolyard at night (easiest to do by taking a big step over the fence that theoretically guards the police squad cars) have decorated the entirety of the building - inside and out - with graffitti, some of it quite lovely and some of it quite scary. Today when I walked the winding path, I was treated to a new artistic display about half-way up. 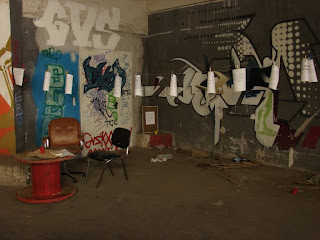 The installation (as it were) is called "Instant Show: Hommage to Electronic Typography." In English. With "hommage" spelled strangely. It's by an artist and art critic named Luca Arnaudo, who wrote a two-page explanation of this exhibit, which consists of pieces of paper hanging on a string (and perhaps the paperback of Sartre sitting on the table). Most of the explanation is kind of boring, but here are some interesting bits in Italian followed by my English translation:

On the origin of the project and choice of my warehouse for the installation - "...Discorrevo al telefono con Fabian Bringhurst e... ho accennato alla mostra che Dario e il Vagòn Libre stavano organizzando: da quel che ricordo, gli ho parlato della rampa e della sua centripeta bellezza, di spazi vuoti e dell'inavvertenza che quotidianamente preserve l'equilibrio armonico di tale luogo. Mi sono anche ricordato di Dario che... sosteneva ispirato che tra dieci anni la rampa sarà il Guggenheim di Roma, anzi più bella di ogni possibile museo d'arte perché nata da una funzione pratica (in parcheggio, pensate) che aspetta solo di essere trascesa e recuperata per mostrare tutta la sua bellezza." [I talked on the telephone with Fabian Bringhurst and… I pointed out the exhibition that Dario and the Vagon Libre were organizing: from what I recalled, I spoke to them about the ramp and its centripetal beauty, empty spaces, and the omission that every day preserves the harmonic equilibrium of such a place. I was also reminded of Dario who… sustained the idea that in ten years the ramp would be the Guggenheim of Rome, indeed more beautiful than every possible museum of art because it was born from a practical function (a parking deck, we think) that only waits to be extended and recovered in order to exhibit all its beauty.]

Arnaudo goes on to ask the viewer to consider the artform of the printed word - "Dedicate dunque qualche secondo della vostra possibile attenzione alla nascosta bellezza e armonia dei caratteri che trovate riuniti in questo spazio, cercate di immaginare la passione e lo studio che si celano dietro la grazia di una lettera, nei pressi di una ampersand... giusto a lato di un accento o un asterisco." [Therefore, for just a few seconds, dedicate your attention to the hidden beauty and harmony of the characters that found themselves reunited in this space, and try to imagine the passion and the study that hide behind the grace of one letter, near an ampersand, just to the side of an accent or asterisk.]

And that, although he only had time to print some poetry out at an internet cafe near his house, he hopes to invoke the font stylists of old with the exhibit - "Mi sono limitato a stampare il documento in un internet cafè vicino a casa, ad appenderlo nella maniera più veloce sulla rampa e riprendere il nome del documento per titolo: confido, nondimeno, che qualche osservatore si soffermi qui anche solo per pochi istanti, e ammiri l'arte somessa di Gill, Garamond, Bodoni, e Zapf che traspira da queste lettere." [I was limited by printing the document in an internet cafe near my house, by hanging it quickly on the ramp, and by restricting the name of the document to the title: I trust, nevertheless, that some observer will stop here even for just a moment and admire the art placed here of Gill, Garamond, Bodoni, and Zapf that transpired from these letters.]

I very much appreciated this little display. No one in Rome really knows what the building is used for. High school kids hang out at the bottom after school smoking and talking, occasionally bugging us as we come down and asking what's up at the top. It's weird that someone foreign was in my ramp, talking about its centripetal beauty of form, graffitti, and trash that I see every day on my ascent. But I also like to think that I'm the only one who has seen this exhibit, as I'm the only one who walks up the ramp while everyone else drives as fast as possible. It's my little museum now.

Anonymous said…
How in the world did you know what font the guy used? Please tell me it was marked as a foot note or something.
09 July, 2007 20:43

Kristina Killgrove said…
Yes, the font was marked in a footnote. I didn't just pull Bitstream out of my ass. Particularly since it appears to be a font used mostly in Europe. I will look more closely at the pieces of paper this morning - each was in a different font.
09 July, 2007 23:58

Anonymous said…
The Bitstream Vera fonts are free fonts used by GNOME. So they're not just used in Europe -- they're used by open sourcies and other cheapskates everywhere.