Today's installment features not one, not two, but three fractures for your viewing pleasure. Everyone knows that fractures result from force applied to bone. Bones are partly elastic, making them able to support the upright human frame without breaking during stressful activities like running and jumping. However, some types of stress can result in fractures, namely tension, compression, bending, twisting, and shearing. These create different types of fractures, such as greenstick (when the bone isn't completely broken), simple (usually the result of bending), and comminuted (such as from a car accident). Immediately after a break, the body begins to repair itself. Some tissue and cells die, but a hematoma is formed, in which the initial stages of new bone formation will begin. Within one week after fracture, a callus of new bone is formed bridging the broken ends. In general, fractures will repair themselves within 3 months in adults and only about 6 weeks in children. And now, on to the photos...

This is a photograph of two upper arm bones, the left and right humeri. 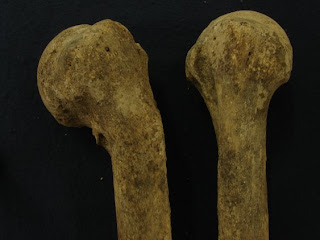 The humerus on the right is non-pathological, whereas the one on the left has been broken at the neck. It's hard to tell what kind of fracture it is without an x-ray, but it was probably a simple or greenstick fracture. Ball-and-socket joints are the most mobile joints in the body but are also the most prone to fracture. It is very easy to fall and break a hip, particularly when one is old and has osteoporosis, and a fracture occurs to the neck of the femur. This humerus was from a middle-aged male without significant signs of osteoporosis, however, so it was likely a traumatic fracture caused by a fall or other force on the shoulder joint. The fracture was likely one sustained earlier in life, as the humeral neck has remodelled fairly well, and there was no indication on the scapula or the lower arm bones that this fracture caused malfunctioning of the shoulder joint.

The second photo is of a lower arm bone, the ulna.

The left ulna in this photograph is shorter than the right and has a thickened section of bone near the distal end with a little bony projection. At some point in this male's life, he broke the lower part of his left arm. It appears that the left ulna was subjected to a bending force that resulted in either a simple or a greenstick fracture. A common type of fracture that affects the lower arm near the wrist is called a "parry" fracture, so named because a person holding up his arm to ward off a blow from an adversary often sustains a fracture in the lower ulna. This fracture obviously healed, but there is a slight residual trauma. The little spicule of bone coming off the side of the ulna is a condition known as myositis ossificans, which occurs when a part of a tendon ossifies and adheres to bone. This condition is seen quite often in archaeological populations that did not have modern technology to set and fix bones. One of the extensor muscles of the lower arm was injured in this traumatic event and ossified at this point. Myositis ossificans is not painful, but it's possible the muscle was compromised and didn't have full range of motion afterwards.

And finally, this photo is the left side of the face of a middle-aged woman, actually the same one whose green finger was a topic of a previous post. 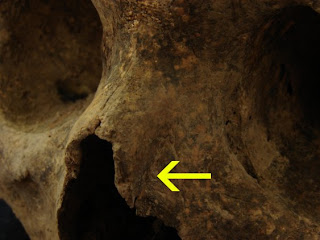 I've indicated with an arrow a faint line or crease in the bone. This crease represents a healed fracture of the left nasal bone. The majority of your nose is, of course, cartilage, but there are two small, thin bones that make up the bridge of your nose. This woman sustained a greenstick fracture to her nose on the left side, which is consistent with a right-handed person punching her in the face. Apart from the initial trauma of getting her nose broken, the fracture seems to have healed, and she would not have had any residual pain or complications.

No one ever said Roman life was easy.