Skip to main content
Posted by Kristina Killgrove May 17, 2007

When I first started looking at the Roman skeletons, I couldn't tell the difference between pathological conditions and those caused by nature. One such example is this picture of the foramen magnum of an adolescent. The foramen magnum (literally, the big hole) is located on the bottom of the skull and allows passage of the spinal column. An inferiorly and medially placed foramen magnum is unique to humans (and hominids) as part of our mosaic evolution, specifically of our bipedal nature. Normally, the foramen magnum is a hole 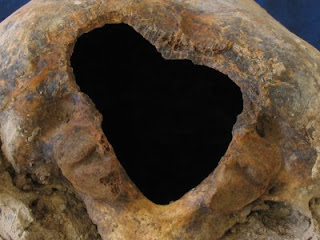 of about 3cm by 3cm, although it is usually slightly ovoid in shape, elongated on the sagittal (anterior to posterior) axis. However, this adolescent had a heart-shaped hole because a disk of bone had been removed from the left side of the foramen magnum. I was pretty excited. This seemed a clear case of ancient cranial surgery. Never mind the fact that ancient cranial surgery near the spinal column would have been incredibly risky, or that almost no cases of surgery on the occipital bone have been found. At the edges of the new hole, you can see little ridges rather than smooth bone. I mistook these for evidence of cranial surgery using some kind of serrated knife. After much research into ancient cranial surgery and trepanation, I reexamined the hole. The "serrations" looked a lot like those made by rodents, but rodents typically gnaw on the frontal bones because of the amount of spongy bone in that location. I have to say, I was not completely convinced that this was not evidence of human-induced damage until I saw a second individual with similar marks on his foramen magnum... and then a third, and then a fourth. I wish I knew why Roman rodents were feasting on the foramen magnum rather than on the frontal. If anyone has insight, let me know!

Anonymous said…
It would seem common sense that drilling a hole in one's head would not be recommended for one's health and well being. Really? What if you were told that Bill Clinton's mentor at Oxford University, Lord James Neidpath, drilled a hole in his head? Or that the procedure is as old as the ancient Egyptians and Incas that practiced it? Or that those who have undergone the surgery report added energy, increased brain power, and even induce a permanent feeling of high?

It is the strange phenomena of trepanation, the procedure of drilling a small hole through one's skull, that is examined by an hour-long documentary released by alternative/rock musician Cevin Soling. 'A Hole In the Head' examines the development of "modern" trepanation as used by people in the United Kingdom, the United States, and The Netherlands for the purpose of attaining a higher level of consciousness.