Skip to main content
Posted by Kristina Killgrove May 24, 2007

Taph o' no me Thor's day

One of the boxes that I had to analyzed today ended up being a smorgasboard of bones. They apparently came from some area of the cemetery that either fell into disuse or was an area for dumping bones that were found when a new grave was dug. This mish-mash of bones meant that I had to use my long-forgotten commingled-remains-separation skills to figure out just how many individual skeletons I was dealing with.

My students will all remember a little exercise we did with popsicle sticks and googly eyes to illustrate how to determine the MNI of a collection - that is, the minimum number of individuals present. For the MNI, one needs to take into account all noticeable differences (age, sex, relative size, muscle markers, even the color of the bone), and then decide which bones can reasonably match with which other ones. If you have 3 right ulnae, 2 left tibiae, and 6 thoracic vertebrae, your MNI is 3 - since you assume that the tibiae and T verts can go with one or more of the 3 individuals represented by the right ulnae.

At any rate, the easiest way to separate commingled remains into individuals is through age and sex. I separated a giant bag of bones into 5 individuals: one adult male, one adult female, and children of about 15, 10, and 5 years of age. When I checked the anthropological site report to see what their MNI was in the field, I discovered it was 6. They had included another juvenile of about 2 years of age. I read the report, and their attribution of 2 years of age was based on a fragment of the top of the femur and a fragment of the pelvis. It was easy to find the bones the excavators had mentioned, as they looked like this: 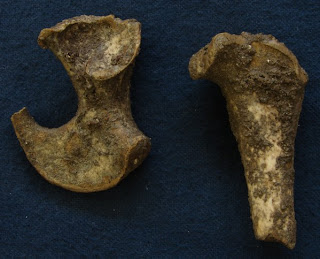 When I was excavating in Tuscany, we accidentally came across some Medieval burials. I was called over to help excavate this adult female and when I took a water break, I noticed that this guy - who was on his first archaeological dig - was neatly piling the bones of a 2-year-old child on the side of his trench. I freaked out and yelled at him to stop, and he looked at me confused and said, "But they're just animal bones." That is to be expected from beginning archaeology students who have never taken osteology. But these Italian bioarchaeologists mistook faunal remains for human in the field, erroneously giving a higher MNI than warranted. Granted, it's better to err on the side of human when you're unsure, but these are clearly not human remains. The femur (right) is understandably confusing at first glance, since it is from an immature animal, but the greater trochanter is clearly fused and the bone is not the same shape as a 2-year-old human child's. But this ischium fragment (left) is difficult to mistake for human. It looks nothing like the puffy, almost bulbous ischium in a 2-year-old human (bottom right).

The lesson here is, cultural processes contribute to taphonomic situations too: you never know when you're going to run into a big pile of animal bones. Chances are, if you're digging up an ancient cemetery from a culture that practiced animal sacrifice and feasting for the dead, you'll need to be able to quickly and accurately separate human from animal.

Chris Cameron said…
i seem to remember handing in a paper on that MNI assignment that had something to do with a cat and a lost race of popsicle people. but i also remember not having slept for 2 or 3 days at the time, as well.

Kristina Killgrove said…
Yeeeeeahhh. I wasn't so happy with your insane popsicle race paper. I wonder if I still have it? You got an extremely middling grade on it, so, yes, you are lucky to have passed. ;)
27 May, 2007 05:21

Anonymous said…
I remember thinking that the MNI project would be so easy and yet I think it was the most difficult thing you could have ever made us do. Thaaaaanks, Kristina.
07 June, 2007 19:11