Skip to main content
Posted by Kristina Killgrove May 15, 2007

So I was digging through a bag of cranial fragments, annoyed that the individual's skull was broken and unmeasureable. I picked up the frontal bone, which makes up your forehead and the top part of the bony eye socket, and immediately realized that it felt funny. It was surprisingly thick, but only in the area of the frontal bosses (the roundish portions of your forehead above your eyes). It's very difficult to take a picture of an oddly thick bone, but here is my best shot: 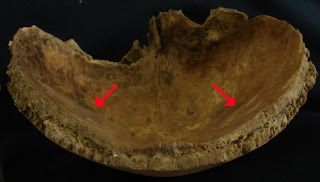 This photo was taken from the posterior of the frontal bone looking anteriorly, and it shows the endocranial or inside surface of the forehead. The arrows show the portions of the bone that are thicker than normal - they present a flattened endocranial surface rather than a normal concave surface.

I wasn't hopeful about finding any information on this condition, but I knew that it was some sort of hyperostosis, a generic term for extra bone apposition. After I followed some leads, I came across an explanation. Internal frontal hyperostosis gets little press in the pathological literature because it is actually a common finding in older females. This condition affects women 100 times more than men and usually affects post-menopausal women. It is thought to be related to changes in pituitary hormones. But if you think you're in the clear, being a woman who's not menopausal, think again. Pregnancy can also bring about changes in the cranial bones, particularly the frontal, causing increased bone apposition and increased density of the cranial vault. Again, this is related to the pituitary secreting hormones. Hyperostosis conditions, while technically pathological, are generally asymptomatic and do not cause pain or death. There are recent medical journal articles, however, that show a correlation between internal frontal hyperostosis and headaches.

That's it for Pathology Tuesday. If you like this feature, let me know in the comments. Or else I might just not post more pictures of weird bone formations again.

Anonymous said…
All this fishing for comments is giving me a headache. Either that, or it's my swelled forehead-bone.

Anonymous said…
This is one of the cooler things I've seen. Any chance on doing some weird muscle markers/bony appositions? I wasn't able to get a picture of Crackhead Cletus but I'm going to do my best to take a picture to show to Lara and you. Oh yeah, and you misspelled "unmeasurable." :p
15 May, 2007 18:39

Anonymous said…
I like weird pictures. :) I wish I could see what MY skull looked like. I wonder if it would have any of those weird characteristics...
20 May, 2007 16:04